Among the items discussed at the meeting of the Council of Ministers of Agriculture of October 22, was the distribution of direct aid among farmers. As part of the reform of the CAP, the European Commission proposes that income support converge towards a uniform value per hectare within a state or region, by 2019 at the latest. This to reduce the gaps between farmers and improve the legitimacy of the CAP subsidies. 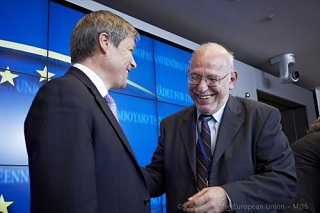 Some Member States that have kept historical level of payments – calculated according to yield levels or per animal head from 1992 – are trying to postpone the deadline of 2019, arguing the brutality of such phasing out of historical aids for their farmers.

The phasing out of the historical aids was already part of the 2003 reform. But the final agreement made it optional, paving the way for different direct payment schemes in the EU.

At the time, several states fearing the negative impacts of decoupling on farming or production potential in general, have chosen to perpetuate historical references. This is particularly the case in France.

In contrast, other states have combined models more or less complex to move away permanently from historical aid. In 2005, Germany and England chose a convergence path towards a more uniform payment per hectare in 2013.

The 10 new states that joined the EU in 2004 and 2007, have adopted the single payment scheme at the surface (SAPS), which was not indexed to historical levels, since their agricultural land had no references earlier.

At the recent meeting of the Council on October 22nd, a group of Member States, led by Ireland, and including Denmark, Spain, Italy, Luxembourg and Portugal supported an alternative proposal for the convergence of aid between farmers.

They spoke about time and flexibility, but mostly they refute the principle of a uniform flat rate:

“The above mentioned Member States agree on moving to a direct income support more equitably distributed between farmers by reducing the link to historical references, but question the proposed approach based on a national or regional “flat rate”. Diversity and complexity of agriculture across the EU requires greater flexibility for Member States in an almost fully decoupled system of direct payments. ”

Then they call for prudence:

“The economic and financial situation, together with the resulting budget constraints, recommend the highest prudence in moving support between farmers. The objective of maintaining agricultural activity throughout the EU is still present in the CAP towards 2020. Income support should take into account different situations among farmers, regions, and agricultural sectors within the limit of WTO commitments. ”

And they claim a similar rate of convergence between states and farmers:

In addition, the proposal states that Member States may apply the green component as a percentage of base pay established at the individual level and not at the national or regional level. That is to say, a “proportional” greening.

Introducing this debate on October 22th at the Council, the Commissioner Ciolos opposed this proposed greening “proportional”, while the French Minister Stéphane Le Foll has meanwhile remained “open.”

This discussion shows that the convergence and the greening of direct aid are closely related for Member States that still have a historical references model. Further delay in phasing out historical aids weakens the legitimacy of the CAP in 2020.

Fewer than one in four European cititzens live in rural regions, according to the EU statistics agency […]