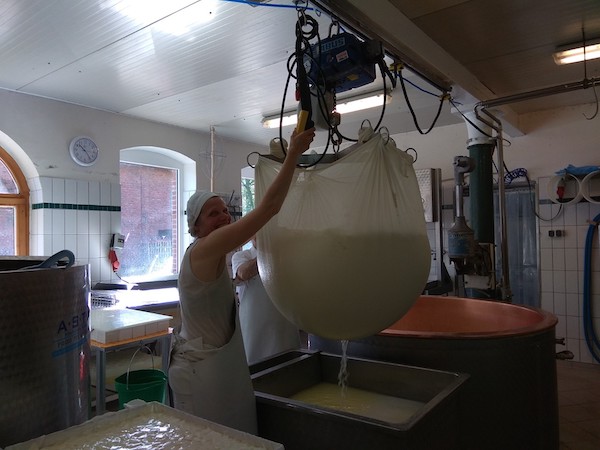 What the thousand year scraps from a meal tell us

I’m an archaeologist, and while the possibility of uncovering treasures like the rosetta stone sounds romantic, many of us are engaged in more mundane matters. As behavioral and material scientists we often dig through people’s garbage as a method to tell stories about people’s lives and relationships, to each other, to their land. Much of my work revolves around subsistence: how did people make a living off their land, how did they develop new farming strategies to feed a growing population. Sounds familiar?

Really, it is a pretty cool profession. We have lots of technology at our disposal, giving us clues about how old things are, how things were made, or what people ate for instance. I come from a specific research tradition, we not only look at the past, but also at contemporary societies and communities to give us ideas about the relationship between cultural material and the behavior and mindset that created that material, why it worked, why, at a certain point, it failed.

My specialty is space, not the outer kind, but spatial aspects of our daily lives. How we move, use resources and settle in specific places. These days, ‘flying over’ seems to be the norm, but if you take the time to travel slow, you may have noticed something while moving through intercity or rural lands. Where are all the animals? The traces of our food system?

From big data to digging deeper

It was during one of those community projects, focused on water management issues, that it hit me in the face. Yes, I could analyze Big Data sets, linking changes in the physical landscape to natural and cultural processes, but how on earth a farmer knows where, when and what to plant remained a mystery. Even though viewing our planet from space has helped us monitor changes on our planet, as well as identifying triggers and causes of those changes, there is a growing, unsettling awareness in scientific circles that the real unknown factor in climate change modeling is hard to capture in those data, namely, human behavior. It is my bread and butter. In search for ground truth.

The knowledge of the farmer, the farming community. I only had a general idea, but working with several traditional communities gave me a glimpse of what was for me an obscure, knowledge source. I decided that immersing myself in the practice of small-scale and organic farming was a way to gain such knowledge.

One of the eye-openers early on was that ‘community’ is not the same as ‘homogeneous group’. The small scale farming world, traditional communities, are made up of diverse characters with specific needs for support. The young saffron farmer who decided to gave up her job as a small-business consultant is plagued by very different concerns than an older farming couple whose children have no interest in continuing the family farm. Over the years I learned about farming, soil, changing climate and its impact, but also about the impact of industry, the taste of food, and the fact that there is a lot more to learn about what life is and how everything is intertwined. Most of all, I became aware of our preconceived notions guiding our behavior, from habits underpinning small scale community dynamics to the lack of transparency in the political sphere.

Becoming part of the farming community has helped me to identify certain behaviors that make it difficult to make structural changes. It also made me realize that some of my own long-held beliefs and habits were rooted in ignorance that had little to do with messy reality, especially when it comes to animals.
Many of us know bits and pieces, there is a growing awareness that reliance on animal products to feed the global human population is a major driver of many of the world’s problems that detrimentally impact environmental and human health and addressing this issue is urgent. At the same time, the livestock sector is one of the fastest developing agricultural sub-sectors. Balancing the nutritional needs of the growing human population with mitigation of climate change effects has become a tremendous challenge for policy makers.

Personally, I went meatless long long time ago, but yoghurt and cheese are still my all time favorites. I am embarrassed to admit though that it took me a job in the organic dairy sector and working as a herder before I began to fully understand the role of animals, their lives, their rights, what they provide us with and how we can begin to build better, more sustainable, humane relationships.

The animals on the biodynamic farm I worked have a good life. I started out milking and herding goats seriously two years ago. About twenty, by hand, about 50 liters a day, but nothing compared to the amount of milk produced by the farm’s 60 something milk cows. Quickly I started helping in the Kaserei, and eventually my hard work landed me a job assisting in all things dairy: making yoghurt, cheese, packing and cleaning, lots of cleaning.
Making cheese from good, mostly raw milk, is a satisfying but labor-intensive job that comes with a number of ‘waste’ products though. Warming the milk, infusing with bacterial cultures, adding rennet, the milk transforms, ferments, causing it to separate into curd and whey. The curds will become the cheese, but all the whey, protein-rich sweet juice, what to do with it?

Of course, Pigs! They love it and it turns them into succulent hams. That is the reality of it. They have a good life, eat delicious food, but in the end they will serve us on our plates. And that is not all. There are more ‘waste’ products related to dairy. Being with goats everyday makes me aware. Last summer, I traveled to Norway to live in the mountains for the season with a herd of about one hundred of them.

Go to Where the Goats are

Goats. Every morning and afternoon I milk the goats near the summer cabin where I reside. Some are still too young, but about 80 or them gave birth this year and thus give milk. During the day and night they can roam free on the mountain, a place that looks inhospitable to us, but is a goat’s paradise. They forage on birch bark, lichen, mushroom, and other shrubs, chewed and ruminated it is transformed into the white gold that we can drink straight up or, left to spill and mixed with other bacteria it will ferment into delicious, biodiverse cheeses to feed our gut community. Norwegians even make a sweet, buttery whey cheese, no need to discard the whey, but there is still something else.

It is a simple truth of nature. In order to have milk, females need to deliver babies. Many of these kids, are of course males and of no use to us, nor can we keep all the females. Not that their meat is desired or profitable, but as long as the young bucks are humanely slaughtered, if there is such a thing, the meat and hide can be useful and their stomachs contain essential ingredients for cheesemaking (rennet). Of course it is possible to keep milking, but then you have to ask yourself if it is acceptable to never give these girls a break to recover.

After milking in the morning I accompany the herd up the mountain. I watch them, as they walk, and select their delicacies, the rhythmic sounds of the bells and their feet on the trail. Time to appreciate the truths of nature, the connection between what the land provides in these remote locations, transformed by the goats to benefit my health in multiple ways, by keeping the ecosystem in tact outside as well as inside.

Grazing animals have a bad reputation, especially in the natural heritage world, where overgrazing is often mentioned as a cause of ecosystem collapse. Keeping the animals out of sight and in closed quarters ameliorates this concern, but certainly does not solve the problems. Grazing too much in one place may be problematic but roaming animals can actually benefit the land, by allowing animals to follow their food, they can become agents of soil regeneration and biodiversity. I watch the goats and enjoy their company. I take care of them while I get used to the less enjoyable aspects of this life, which makes me even more appreciative of the rich, biodiverse milk they offer everyday. Understanding this life cycle and enjoying its ‘fruits’ makes all the hard work worth while.

Herders and their animals, farmers and anthropologists

Herders are not the most liked in the land, I have learned. Farmers tolerate them and their animals, but are wary of animals trespassing and damaging their property. I have become sympathetic towards herders, not just because I have grown fond of the animals, but also because of their particular status in the rural world. I consider myself a land worker, and even though I share many of the same ideas and ideals as many of the small scale farmers I have met, the group of landless laborers, including herders, are particularly vulnerable.

The hard work and effort that is put in by many of the different farmers, be it traditional raised farmers turned farm businesses or urban managers turned new farmers, crop growers or vintners, it is often not enough to be profitable or sustainable. I enjoy lending a hand in the land, because being outside, engaged in physical work provides more benefits beyond the good food that is produced. Sharing more than food, enjoying the stories of the land and its sensory richness. Yet, I have noticed how, over time, you can feel exploited. I do not blame the farmers, but our system that undervalues farm work and its products.

Herding, herders and their animals. From an anthropological perspective, we value its history, the romantic aspect of herding heritage all around the world, but we have failed to even pay attention to, and value the way this lifestyle can contribute and teach us about sustainable and ethical living. Being up close has deepened my understanding of the hierarchies and relationships between people, between people and their animals, and has raised an important question for me about the complexity and potential feudality, albeit in a new form, of our current rural lands.

Organic livestock farming is the only CAP supported agri-environmental (AES) measure that has been shown to correlate with higher bird numbers. This finding comes from newly published research on birds in Finland. […]