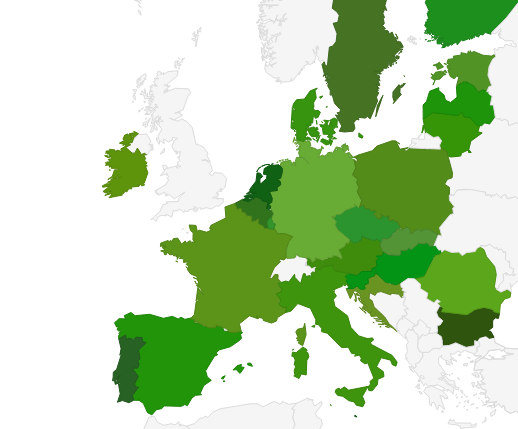 In the CAP reform deal agreed in June 2013, both Council and Parliament have supported greater flexibilities for implementing Pillar 1 new direct payment schemes. As a result for some, the CAP would seem to be less “common” and be more “à la carte”. However, since the 2003 reform had already introduced a phasing-in agenda for decoupled payments, CAP is already implemented through differentiated schemes among the MS.

With the 2013 reform, many new schemes aiming at improving the direct aids targeting are mandatory (greening, young farmers) while other are facultative (i.e. optional) (coupled payments, payments for areas with natural constraints, small farmers scheme). Only their implementation modalities can be adjusted: upsizing or at the contrary downsizing the redistribution of CAP money among farmers according to national/regional priorities.

Whether the CAP reform has been decided by 28 Member States (MS) and the European Parliament, it will been applied within 32 EU territorial constituencies. In the UK, regional jurisdictions will apply the CAP reform according to their distinctive boundaries in Northern Ireland, Scotland, Wales and England. In Belgium, Pillar 1 decisions are left to the two main regions Flanders and Wallonia.

8 MS (BG, D, EE, MT, NL, RO, UK-Sc) have decided to extend the negative list – that’s entities which cannot get a payment, unless they can prove that agriculture is their primary activity –  including for instance mining companies (D), municipalities and public bodies as well as financial and insurance companies (IT). At this stage, 8 MS have decided on a minimum of hectares for which payments can be recieved, ranging from 0,5 ha (i.e. PT) to 5 ha (DK). 6 MS will impose a threshold  –  a minimum amount of direct payments  – of between 100 EUR (SP, PT) and 500 EUR (NL).

In terms of the willingness of MS to move towards a fairer CAP, full convergence of direct aids is one of the most important measures through which we can make an assessment. 9 MS and regions have decided to apply the slower way to phase out from historical payments, including the 30 % cut limitation for individual beneficiaries (Flanders, Wallonia, GR, SP, FR-except Corsica, HR, IT, PT, SI). These MS and reigons are also maintaining, for the longest possible period, existing discrepancies between similar farmers. 10 MS and regional authorities have completed or will move towards a flat rate at national or regional level by 2020 (AT, D, FI, FR-Corsica, MT, UK-except NIr, NL, SE).

9 MS (IE, GR, AT, PL, BG, HU, IT, BE, UK-except England) have chosen a mandatory capping (i.e. payments ceiling), ranging from EUR 150,000 to 600,000. 15 MS will apply the minimum 5% degressivity on amounts of basic payments above EUR 150,000. 9 MS will allow for the subtraction of salaries actually paid by farmers before applying these reductions. The estimated amounts cut from the highest payments due to degressivity and capping is EUR 558 mio between 2015 and 2019.

8 MS will implement redistributive payments (BE, BG, D, FR, HR, LT, PL, RO) representing between 5% and 15% of their 2015 direct payments. At this stage, it is not easy to assess this figure : either it’s a way for MS which have a certain number of CAP payment beneficiaries to avoid a mandatory degressivity, or it does reflect a political choice to support farm employment under 50 hectares in MS not really affected by degressivity above 150,000 EUR (as in France).

Only 6 MS have chosen a flat rate greening payment while at least 9 have opted for a farm holding payment. Those that have chosen such a solution, frequently together with the 60% minimum of convergence of basic payments, demonstrate that their main objective was to soften the redistributive effect more than a sincere willness to green the CAP.

8 MS have claimed for equivalent measures or for certification schemes. Crop diversification is the prominent choice. The bulk majority of MS will manage the ratio of permanent pastures and grasslands at national level; only 4 will manage it at regional level. Regarding Ecological Focus Areas (EFAs), only 2 regions or MS have opted for a collective implementation (NL, Flanders). No MS has decided to apply it at regional level.

Such choices show that the prioritisation among MS is to move away from the actual intention of EFAs, which was to introduce genuine agroecological practices into farming systems. By  choosing these cropping, area based practices, far more often than landscape features such as trees, hedgerows, ponds and strips, MS betray a desire to carry on regardless, ignoring the intention of EFAs which was to introduce an agroecological infrastructure into farmlands.

Payment for areas with natural constraints

Only Denmark (0,32%) has confirmed the application so far. Given that this type of payment already existed within Pillar 2 (less favoured area (LFA) payments), many MS did not see the added value preferring rather to mobilise Pillar 2 and not use Pillar 1 resources for this type of activity.

Two thirds of MS have decided to use 2% while one third will give 1% of their national envelope. MS will in total spend at least EUR 1 ,570 mio per year for young farmers.

15 MS will implement this scheme, which allows very small beneficiaries to avoid greening and cross compliance obligations. What is interesting is the fact that this voluntary measure -basically targeted at Eastern European MS, it is also chosen by Germany and Italy. Whether the rationale of the measure is more simplification and national administration-oriented, this trend confirms that small scale farming and/or part-time farming remain a statistic reality in many MS from Portugal to Estonia, from Greece and Romania to Germany. With 10% Italy and Romania will dedicate the highest share of their national ceiling to this scheme. The minimum size of farm to qualify for this scheme is decided by each MS.