Seeds are a core and essential part of many farming systems, and farmers’ ownership and control of seeds  – seeds they save, open pollinated seeds, and an apt, varied range of seeds for both food security and food sovereignty – is one of the biggest agri-food issues of our times.

The nexus of the problem with how seeds operate in the food system is this: a small handful of agri-food and chemical giants have significant control of the ever tightening seed market. Meanwhile small farmers, gardeners and growers are finding it more and more difficult to save and access seeds.  Current proposals at the EU level may compound this situation. These are also threats to seed saving, often under the guise of supposed improvements in efficiency, performance and safety. When legislation is written with the interests of the major corporations involved in seeds in mind, it inevitably ends up promoting a business-as-usual model of limited varieties, use of pesticides, GM and other agri-industrial inputs and processes. Organic and other alternative ways of dealing with seeds sometimes have different needs – e.g. organic seeds are not designed to receive the same level or type of what are in effect unsustainable inputs. The Regulation also may impose excessive uniformity in seeds, reducing the range and scope of seed availability, thus disenfranchising future generations of the cultural (bio)diversity of plant heritage.

In extreme cases, farmers are having the seeds they have saved destroyed by the state. And in general, Seed Saving organisations are struggling to survive, many making pleas for supports in the face of reduced funding from the state.

This proposed legislation is thus too broad (includes small scale producers), too restrictive (lack of member state flexibility, lack of seed heterogeneity, size of niche organisation), too compulsory (takes into consideration too many of non-commercial varieties).

Presently, the European Union is introducing Seeds legislation. The EU Commission Directorate-General for Health and Consumers (DG SANCO) presented a package of new regulations on plant health, animal health, seed registration and food and feed controls, called Smarter Rules for Safer Food. This, as usual is under the guise of improving the performance of the seed market. Nevertheless, many of those involved in various aspects of seeds –  seed saving, open pollination, gardening, small scale and organic farming –  have fought this proposed legislation for many months, fearing a tightening of the grip of Corporates. Sometimes, small victories have been had along the way. And another is needed soon, as the legislation is again reaching a decision point at European level: final Parliament Plenaries are due in March or April.

According to Pierre Sultana, policy officer at ARCHE NOAH, the association for the preservation and dissemination of crop diversity in central Europe, “A rejection of the current proposal would mean that the EU Commission would have to systematically revise the proposal for a new EU seed law and a come up with a new proposal. That’s a quite complicated process: It requires at circumstances two successive readings in the EU Parliament, and it is not certain whether this can be achieved before the EU elections in May. If this is not achieved, the newly elected European Parliament could continue working on the old draft. “This means that the industry-friendly Members of Parliament can keep a back door open. They hope to advocate for industry’s interests, once the EU elections are over. “The candidates who run for EU Parliament have to tell the voters openly about their stands regarding a new seed and plant marketing law.”

Seed regulation at EU level currently relies on 12 Directives, which allow in practice for many sensible derogations at Member State level for small scale growers and others. These would be lost if the new Regulation comes into force without taking them into account. Another concern is the cost and indeed the ethics of registration of seed varieties. Why impose unrealistic and excessive costs on small scale producers, and why try to register what is in many cases the common heritage of human food production?  Many seed varieties have been saved for hundreds of years by farmers and growers, and also in some cased  bred in a participatory manner. Indeed even the attempted definition of niche (and thus partially exempt) market production is too small – for organisations involving less than 10 employees. Seed saving is labour intensive, and thus often involves more than 10 employees, even for small organisations. 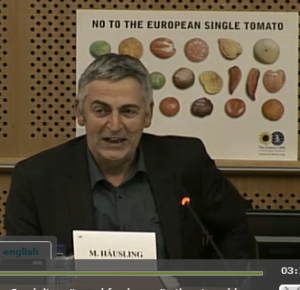 Articles from the ARChive: