The “European Voice”, probably the leading paper in the Brussels EU community’s closed media circuit has invited to a debate about the statement “European agriculture is a good model for other parts of the world to follow”. 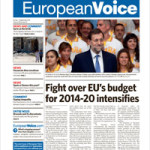 77% percent of participating readers actually disagree with that statement (down from 80% on the first day). Not too many raise doubts on a genuinely destructive concept, even though critiques, such as Ariel Brunner of Birdlife are invited to present their viewpoints.

When clicking at the top right of the discussion page, which says “SPONSORED BY SYGENTA (LOGO)” John Atkins, the chemical and gmo giant’s Chief Operating Officer John Atkins has his say on the matter. He requires more intensivation, better access for farmers to Syngentas technologies and complaints about “unnecessary restrictions on certain technologies and solutions” without naming GMOs and pesticides, the companies main technologies. Atkins would also like to advice the EU how best to spend its 400 mio € on agricultural research, of course, and bring in his companies billion € experience.

Atkins also talks about “our pollinator-friendly flowering field margins” but falls short of mentioning the companies neonicotinoid pesticides, which in the light of mounting evidence about their bee-killing properties the Commission suggested to ban, but failed to do so this month due to fears of legal retailiation from Syngenta.

Sometimes it is just the little twist on the approach to the subject that is worth all the money. Syngenta’s agenda these days is how to spin the inevitable call for more sustainability in agriculture. “Sustainable intensification” is their new buzzword, which was delivered on Monday, 5th March, by former Ag-Commissioner Franz Fischler, an Ag-minister of Nigeria, a representative of the Bill Gates Foundation, and the Director General of the International Fertilizer’s Industry Association and Mr. Atkins again at the annual Forum For Agriculture event that Syngenta sponsors together with the European Landowners Association.

The European Voice’s forum, which was started at the occasion of that event, is open for comments until March 15th, after the Parliament’s vote on the CAP in Strasbourg.