The hope for a form of European agriculture that is more attentive to the environment, both for taxpayers and for those who produce in a sustainable way, has recently suffered a setback. Last week Brussels took a definitive step backwards in the procedures that will give us the new Common Agricultural Policy (CAP) in 2014, the instrument with which the future of our food will be decided. 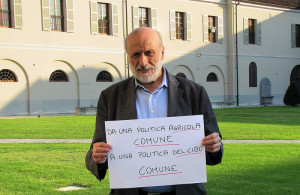 It is not easy to explain to the common man what is happening, but it is fundamental to try. For the last 50 years the CAP has taken over almost half of the European budget, our money. Its reform is the chance to change a paradigm, towards a form of agriculture that is less oriented towards productivism and more respectful of territories, natural resources, farmers and citizens. To date, harmful agricultural practices that destroy the fertility of the land, the environment, the landscape, the intergenerational transmission and biodiversity have been favored, which is profoundly unfair toward the poorest third world countries. And thus Europeans have found themselves, many unconsciously, supporting harmful production methods for which they are paying twice: once for subsidies and again to repair the damages of these destructive agricultural practices. In short, the old CAP has been a disaster.

On January 23 and 24, the European Parliament’s Agricultural Committee (COMAGRI), voted on the amendments to the proposal for the CAP reform which was presented more than a year ago. They decided to block, impoverish or cancel the majority of measures which were put in place to improve the sustainability of our food production system. Now its up to the various governments which, in February, will decide the new budget dedicated to the CAP. More importantly, the European Parliament in March will still be able to correct the path that we have taken thus far, but they must act.

For example, there is the possibility of introducing so-called “greening” measures, those dedicated to the environment. The largest part of the CAP’s budget has almost always been determined by a company’s surface area. Over time this has led to the rewarding of the largest companies that generally are not the most attentive to sustainability. Greening, on the other hand, would be revolutionary in its own small way: it would force even the largest companies to enact sustainable practices.

Rather, with the amendments that were voted on last week they have made greening “flexible”, taking it apart piece by piece and thus creating so many loopholes as to render it useless. They have transformed greening into greenwashing: a mere cleaning up of the façade. With the new standards 82% of European companies would be exempted from these obligatory eco-friendly practices, and many other critical points as well. For example, companies would have the possibility of being paid twice for a single type of environmental measure, and the obligation to reserve seven percent of the company’s surface area for ecological purposes would be reduced to a mere three percent.

In the end there are too many negative elements that outweigh the few good things that have been kept, like incentives for young people who decide to enter the agricultural business, the introduction of a cap of € 300,000 on subsidies for the largest land holders and a better definition of “active agriculture”, which helps to avoid the financing of places like airports and golf courses.

From March 11 to 14 the European Parliament will have the historic opportunity to reverse course and therefore we must put pressure on our deputies so that they don’t make the mistake of supporting that old paradigm that awards those who produce in the worst way and that is certainly not in our collective interests. It is not right to dedicate public resources to the benefit of the few. A European mobilization has begun, which Slow Food is a part of, named “Go M.A.D.”. Through this tool we can contact our members of parliament and explain to them how important the assembly in March will be. Citizens can become protagonists in this debate and it will be of the utmost importance for us all to participate. At stake is the future of our food, the places where we live and our very well being.

Article first published in La Repubblica on January 29, 2013.
This abridged version in English is published at http://www.slowfood.com/sloweurope/eng/news/163651/european-agriculture-its-time-for-a-revolution