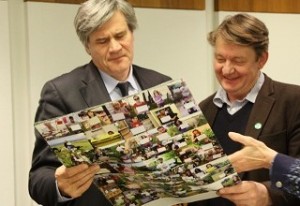 During the course of the meeting Mrs Reinhild Benning from BUND (460.000 members), explained to Le Foll that Greening is the core debate in Germany, including the necessary link between basic payment and the future ‘green’ payment. Benning assured Le Foll that German NGOs backed him in favour of a mandatory 30% green component of direct payments.

Neuland representative Jochen Dettmer reminded the minister that the new SPD/Grünen coalition in Lower Saxony was more than symbolic. While this county concentrates one third of local protests against factory farming, he stressed to Le Foll, the Bundesrat majority is moving away from a conservative lead.

The organic farmers’ representative Jan Plagge (Bioland) told Le Foll of his disappointment regarding the very limited Pillar 2 budget. Plagge expressed his regret about the fact that heads of states and governments never considered Rural Development policy as a serious one.

Germany’s Beekeepers representative Walter Haefeker outlined the fact that any farmland policy is at the same time a bee policy: “pesticides reduction is urgent, greening the CAP is important as wildflowers are essential”.

After expressing his appreciation about the fact that Germany’s NGOs are as diverse as in France, Le Foll detailed his vision on each issue.

Regarding the budget Le Foll stated that he doesn’t believe that the EU can make ecology without any budget. The priority remains an ambitious EU budget for cohesion policy and CAP: “it’s the most difficult but without that, any CAP reform is impossible to deliver,” stated Le Foll.

On Pillar 2, he added: “We will not succeed to increase the Pillar 2 budget. I hope it will remain at its current level; the battle is to stabilize Pillar 2 budget; not to decrease it.”

With regards to Greening, Le Foll knows full well that the positions of all current Member States including its own are based on a maintained budget although it remains to be set: “I believe we will save the 30% greening tiers but my task is to convince the Council to move towards more greening”.

Entering into technical details, he said he “needs to open the greening measures scope, so that farmers can manage crop rotations collectively. Besides, it’s important to have a policy framework that enhances proteins/leguminous plants cultivation.”