Calling for a greener and fairer CAP, several hundred farmers and consumers in colourful costumes from 12 countries came together in Strasbourg today for a series of actions outside the European Parliament as MEPs held their final debate on the Common Agricultural Policy (CAP) before the plenary vote on March 13th. 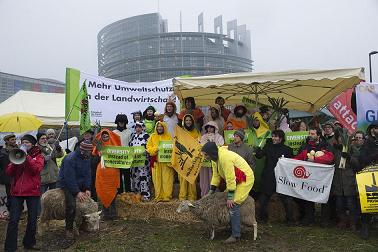 Strasbourg 12.03.2013 –  ‘Farms instead of Factories’ kicked off with an open-air cooking event and a live DJ, and ended with a human chain in front of the Parliament. Leaders from the European movements for the environment, good food and good farming gave speeches. Many MEPs came to meet those outside and share a bowl of soup. The event was coordinated by ARC2020 as part of their Good Food Good Farming campaign, and supported by 27 additional organisations.

Among their key concerns were the suggestions of the European Parliament’s Agricultural Committee to water down the EU Commission reform proposals of improving all farmers’ environmental performance through mandatory greening measures; the impact of Europe’s farming policy on global hunger, biodiversity and climate change; and an unfair concept of subsidies that aims to drive small farmers out of business.

On March 13, for the first time, with the same power as EU Agricultural Ministers, the 754 elected Members of the European Parliament (MEPs) voted on the future direction of Europe’s Common Agricultural Policy (CAP).

Most of the more than 50 billion euros of taxpayers’ money spent on the CAP ends up in the pockets of the agricultural industry and big landowners, rather than being used to support farmers and their communities who produce healthy food, protect our environment and keep the countryside alive.

Hubert Weiger, Chairman of BUND (Friends of the Earth Germany) said, “Misguided farm subsidies and monocultures are the main causes of food scandals and the loss of biodiversity in the agricultural regions of Europe. In the places where animal and plant species are on the Red List, so too are farms; displaced by industrialised agriculture.” He urged that, “In the future, every farm must cultivate at least seven percent of arable land without pesticides and artificial fertilizers. We rely on the good sense of the EU Parliament to finally enforce appropriate policy reforms. With over 50 billion euros going towards agricultural subsidies, society expects appropriate legal consideration to be given to the environment and animal welfare.”

Ramona Duminicioiu, campaigner from Romanian NGO EcoRuralis told the MEPs, “In Romania there are still over 4 million peasants. The EU Parliament must listen: Stop draining our common resources down the corporate pipeline,” adding, “We want to continue working on our farms and not end up as strawberry pickers elsewhere in Europe. Today the course must be set so that we young people in Romania, and in many other European countries, can have a future in our rural areas.”

Aurélie Trouvé of Attac France demanded, “We must end the import of GMO soybeans whose cultivation is destroying ancient rainforests in the South to produce surpluses in the North. These surpluses in Europe will later destroy African markets through dumping of products. The European Parliament must stop the damaging effects of our food system in developing countries. The first step towards this aim: end export subsidies immediately!”

Philippe Collin from Confédération Paysanne highlighted that, “In Europe, 80 percent of all agricultural subsidies go to just 20 percent of agricultural enterprises! It is time the European Parliament ensures fairness for all farmers. Our work on the farms must become profitable again and not mere land ownership.” He added, “We expect MEPs to vote for the future economic viability of the majority of 80 percent of farms in Europe.”