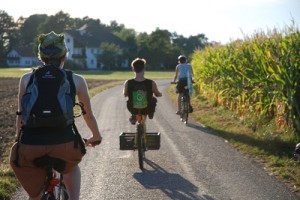 The Good Food March 2012 saw citizens, young people and farmers come together throughout August and September to call for a greener and fairer agricultural policy in Europe, as well as more democratic reform of Europe’s Common Agricultural Policy.

Some set out on bike journeys to Brussels from Austria, Germany, France, Luxembourg, Holland, Belgium and the UK; whilst others organised diverse and colourful events in countries such as Poland, Finland, Romania, Bulgaria and Spain. Find some fantastic photos of the German bike route here.

The aim was to raise awareness of the current CAP reform process, and enable citizens to send their demands for the future policy directly to decision makers in Brussels.

The call for action was issued jointly by ARC2020, European Coordination Via Campesina, European Milk Board, Friends of the Earth Europe, IFOAM EU Group, Meine Landwirtschaft, PAC2013 and Slow Food in May 2012. Find it below: