According to a new UN report published today, almost 870 million people are chronically undernourished worldwide. This means that in the period 2010 – 2012 one in every eight was suffering from hunger. The majority of the hungry live in developing countries. 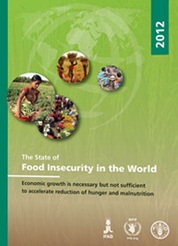 “In today’s world of unprecedented technical and economic opportunities, we find it entirely unacceptable that more than 100 million children under five are underweight, and therefore unable to realize their full human and socio-economic potential,” said the heads of the Food and Agriculture Organization (FAO), the International Fund for Agricultural Development and the World Food Programme (WFP) in the foreword to the report. The report ‘The State of Food Insecurity in the World 2012′ is the latest in a series established at the 1996 World Food Summit and the Millennium Summit which raise awareness about global hunger issues, discuss underlying causes of hunger and malnutrition, and monitor progress towards hunger reduction targets. The publication is targeted at a wide audience, including policy-makers, international organizations, academic institutions and the general public with a general interest in linkages between food security, and human and economic development.

Compared to the figures collected for the period 1990-92, the number of undernourished people has declined by 132 million. This is more than previously expected. The report is optimistic that the UN Millennium Development Goal (MDG) target of halving the share of the world’s hungry could be within reach if this rate of decline continues until 2015, and adequate measures are taken. In reality however, progress in reducing hunger has slowed since 2007-08, and now levelled off. Looking at different regions, the situation has improved in Asia and the Pacific, where undernourishment has decreased to 13.9%.  Latin America and the Caribbean have also seen an improvement, with ‘only’ 8.3% of the population suffering from hunger. In Africa, the number of hungry people has risen from 175 to 239 million – with more than one in four going hungry. In sub-Saharan Africa, hunger has been rising by 2% per year since 2007.

According to the authors, the report ‘State of Food Insecurity in the World 2012’ used updated information on population, food supply and distribution, as well as food losses. The methodology does not however fully capture the effects of the food price crisis of 2007-2008 or the short-term effects of recent food price surges.

On July 1 the Czech Republic took over the EU presidency until the end of the year.  So what are the priorities? Reading between the lines, Ashley Parsons offers a quick analysis of the agriculture program and what to expect.    […]

Agroecology and its near terminological cousins are in the ether – and many organisations are asking for your feedback, or telling you about great examples from all over the world. So, what are they? […]