FIND A PDF OF OUR ANALYSIS HERE

From January 2013, in the run up to the final EU Parliament vote on the Common Agricultural Policy (CAP), citizens from all over Europe contacted their MEPs to talk to them about Europe’s food and farming policy and ask them what kind of future they would endorse. Following the vote on March 13, we at ARC2020 thought it was important to summarise the results and see whether the Parliament had supported citizens’ demands for a green, fair and local CAP. 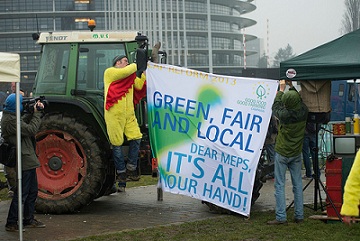 In the PDF above you will find a breakdown of the vote according to the four key themes of the reform:

Within each theme, we have only listed the amendments (on which MEPs vote) that were most crucial to ensuring our demands were met. The amendments are divided by issue (e.g. capping, greening, transparency).

Using the data provided by the Parliament itself, along with the more user-friendly graphics published by www.votewatch.eu, we checked to see which amendments were adopted and which were rejected. This information is provided for you here. In many cases, you can also see how close the final vote was, and follow how your MEP voted on the different amendments – whether they rebelled, voted according to party lines, abstained etc. This level of detail is made available whenever something known as a ‘roll call vote’ takes place: essentially a permitted request for a vote to be counted. These counts are later made public and provide insight into what happened on the day.

Although not as many as we would like, there are several cases where the Parliament voted according to our campaign demands. These are highlighted in green!

We hope that this is a useful summary for all citizens following the CAP reform process. We will certainly be using the information in the next steps of our campaign. In light of the many meetings that took place as part of our Go M.A.D. (Go Meet A Deputy) campaign, it has been revealing to check in on those who made promises to their electorate. We hope that citizens will check and react to the way their interests are being (or not being) represented at the European level. With next year’s EU elections fast approaching, this information is very timely. Now more than ever is the time to keep the pulse on MEPs and monitor how they are choosing to spend our money…