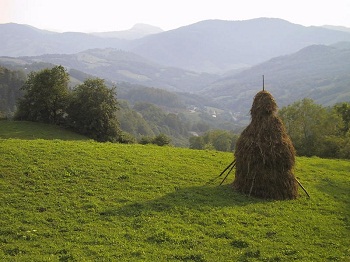 While simplification is often called for nefariously, by agribusiness trying to get rid of environmental protections, it is also the case that from a peasant farmers’ perspective, the forms and processes which accompany funding and supports  are often very complex and convoluted. This can mean that, ironically, the ones who often call for simplification  – agribusiness interests – are also the only ones with the staff, time and expertise to actually access funds. So yet again peasants loose out. María Rodríguez of Eco Ruralis reports.

The CAP is a complex European package of policies which is not always adapted to regional realities. CAP schemes are barely accessible in certain contexts. However, it should not be forgotten that at the very end of any strategy there are real, flesh-and-blood people. The capacity of the policies to be adapted and implemented is essential so that they actually reach the population. Romania holds the second worst ranking in the European Union in terms of CAP  funds absorption. Based on that, the allocation of payments for the period 2014-2020 needs to improve and actually reach those who really need it.

Romanian politicians want to move towards a modern and competitive economy that relies less and less on peasant agriculture. Interestingly, the European Common Agriculture Policy (CAP) has aspects which can bee seen to be supportive of peasant farming. The first official version of the Romanian Rural Development Plan (NRDP) for the period 2014-2020 (based on the CAP regulations) shows a major focus on small farmers as essential agents to keep sustainable agriculture and rural landscapes alive. Both the CAP and the NRDP are still focused on the economic aspect of agriculture; the need for (more sustainable) capitalized farms is seen as a must  in the purposed measures (see for instance sub-measure 6.3 “Business to start up aid for development of small farms”). There it is, then, a (new) CAP that theoretically wants to assist rather than extinguish the peasant world.

What concerns us here is how this is promoted and to what extent funding actually reaches peasants. Even when the best intentions are pushed forward (for instance through Axis 4, “local development”), the CAP does not seem to ,as it were, ring the doorbells of Romanian common rural households. Because of the complexities of this policy, the CAP funds are usually won by big farmers who have the resources to reach them; or urban and highly-educated individuals that have the knowledge to build targeted projects and hence access funding. This is definitely not relevant to the average peasant.

It is important to highlight here that big corporations are nowadays pushing for a simplification of the CAP. Agribusinesses are interested in lowering the regulations in order to avoid being constrained by high standards that will hamper their economic growth. However, these purposes are different (and even contrary) to our claims. We defend a simplification which improves the peasants´ access to subsidies for the wellbeing of the small farmers, and not corporate tricks.

High levels of bureaucracy, complex procedures, delays, lack of information, corruption, and deficits in the local governments are again and again responsible for systematic failures, and this keeps people from accessing funding. For the CAP period 2007-2013, Romania received over 13 billion Euros; almost 6 billion for agricultural direct payments (Pillar I) and 8 for rural development (Pillar II). In terms of purely agricultural support, the country did well, with an absorption rate of funds from Pillar I of almost 90%. A different story relates to Pillar II, where the rural development and agri-environmental measure reside. Pillar II has an absorption rate below 60%. Money is not distributed, projects are paralyzed … and this does not only affect the CAP. As an example, from the more than 19 billion Euros that Romania received from the European Union as structural and cohesion funds between 2007 and 2013, only around 40% have been allocated. Where is the success here?

With the new CAP period (2014-2020) about to start and the Romanian new official version of the NRDP launched just 6 months ago, the practicalities of the implementation are a major issue that should be acknowledged and addressed. If 10 billion Euros are going to be given to agriculture and 7 billion to rural development, every effort must be made so the money reaches people who really need it.

Let’s focus on Pillar II supports. In order to get funding from the budget for rural development, a project must be sent to the Ministry of Agriculture and Rural Development. It has to be presented at the right moment, when the application period is open it is announced on line. These applications are complex to understand and the writing of the projects a tedious task for those who are not used to them  – that’s most of us. Here is where the local governments and private consulting agencies should take the leading role. In addition, even when a project is approved, bank loans are necessary to start it.

Applying for funding for a Pillar II project is a bureaucratic process which furthermore is not facilitated by the local Romanian officials. There is a lack of information about the CAP and its possibilities at the village level; the internet for instance is not an efficient informative tool for rural Romania. Local administrators usually lack knowledge, resources and/or interest to help farmers to build up their project applications and private consultants cost money. In addition, consultants are not always the most reliable facilitators because profit is involved in the process. Furthermore, the banks do not have confidence in agricultural endeavors and barely give loans to small farmers.

Peasants are not used to these complex procedures. All this bureaucracy should be addressed if the CAP is to make an effect at the ground level. Some of the purposed solutions are:

If a policy does not reach those ostensibly targeted it is useless. A genuine peasant-orientated simplification – and not a simplification to allow agribusiness to trash the environment – would help to avoid elite fund-grabbing.

From Attila Szocs (of Eco Ruralis)

Fuori di Zucca is not just an online platform coordinating fair and sustainable purchasing transactions. The association mobilises a peer-to-peer network, where members of civil society, policymakers, producers, consumers can interact around a common mission: food sovereignty. So how does it do this? Matteo Metta has more. […]

As the English countryside is gobbled up by monoculture, one family farm is making space for nature. Carymarsh nature reserve is a patchwork of habitats – wetlands, woodlands and feeding grounds for overwintering birds – where people are welcome too. Story by Ursula Billington. […]

The Yorkshire Dales is an upland area of Yorkshire, Northern England. Agriculture has been an integral part of the area’s culture and economy for thousands of years. A hill farm agricultural system is upheld here, with sheep as the primary livestock, although many have diversified into mixed beef systems, and dairy operations in the lower valleys. How has CAP – and its changes over time – impacted on this place and its people? […]