In August 2012, the European Parliament published over 7,000 amendments to the original CAP reform proposal issued by the EU Commission: 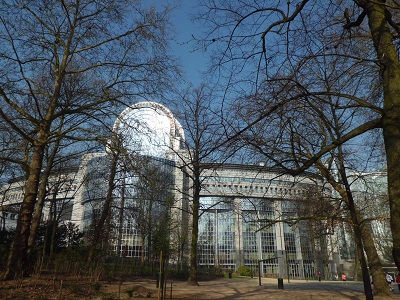 After months of cross-party negotiation, the compromise amendments were officially presented at a press conference in Brussels on December 18th, the same day that Agricultural Ministers gathered for their final meeting of 2012.

The initial set of 7000+ alterations above has now been whittled down to around 100. Speaking to the press yesterday, Paolo de Castro, Chair of the European Parliament’s Agriculture Committee claimed that there were three main elements to the amendments the Parliament has made: less bureaucracy, more flexibility and a greater move towards environmental and social sustainability. However, the amendments which were then briefly presented to the audience suggest otherwise. The presentations were made by the three rapporteurs in charge of the documents:

From the beginning, direct payments to farmers has been the most controversial negotiation package, covering the key sticking points of greening and capping. Following yesterday’s press conference, it is clear that all three greening elements have been weakened through the compromise process. This is a result of many parties wanting to replace the Commission’s compulsory greening measures with a so-called ‘menu approach’ which would allow Member States to pick and choose the environmental measures they implement and enforce. Although the 3 greening measures remain in the compromise text presented by Santos, there are a number of variations within them which could allow for exemptions and exceptions. It will also be possible for states to replace the greening obligation with certain equivalent measures. In reality, “equivalence and certified schemes” will add administrative complexity as Member States will have to establish their own schemes, run them past the Commission etc. What’s more important is that in the menu approach, all issues except one (energy efficiency) are already covered or even obligatory in cross compliance. This means that Member States may offer, and that farmers may chose, the easiest options. A few issues in the menu also overlap.

On capping, meaning limiting direct payments to a certain maximum amount per farm, no compromise was possible as the very principle (the Commission had proposed 300, 000€ as upper limit) continues to be resisted  by EPP, ECR and ALDE.

In terms of rural development, the LEADER programme will receive a 5% ring fence of European funds, and agri-environmental schemes and organic farming will receive a minimum of 25% of European funds. MEPs also backed an amendment to the system of transfers of funds between pillars, with 15% from Pillar 1 to Pillar 2, and 10% from Pillar 2 to Pillar 1 (5% more than the Commission proposed for both cases).

On the single CMO, Dantin called for a “more decentralised” system and a shift away from the level of intervention seen in the 1980s and 1990s. However there was no agreement in the compromises to remove the export refund instrument from the single CMO regulation.  La Via spoke on advisory services for farmers, as well as controls that won’t penalize farmers unnecessarily. It seems that Farm Advisory Services will not be obliged to provide information on organic and agri-environment and climate measures.

De Castro also confirmed the timeframe for the reform process for the coming months with the final vote in the AGRI Committee still scheduled for 23 -24 January 2013, followed by a plenary vote on 13-14 March 2013. After this, trialogue negotiations will begin with the Council and the Commission. De Castro also reiterated the importance of the outcome of ongoing negotiations on the EU’s long-term budget 2014-2020.

Elsewhere in Brussels, the Council of Agriculture Ministers gathered for their final meeting of 2012, and the last under the Cypriot presidency. A key aspect of the Council meeting was the presentation of the Cypriot presidency’s progress report on the CAP during the last 6 months: CAP reform: Presidency Progress Report (December 2012). The report outlines the Presidency’s opinion on progress achieved in the negotiations on the reform and identifies key issues which remain outstanding.