This was a bad day for the diversity of species and landscapes in Europe, for climate change mitigation and for the long overdue adaptation of our farming practices to the global and local needs of environmental and social sustainability. The Parliament did not live up to the demand that public money should be spent for public goods only. 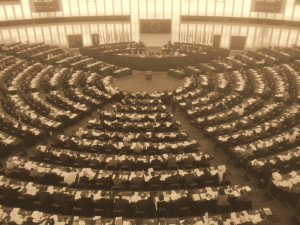 In the run-up to the first ever vote of the Parliament on the 50 year old Common Agricultural Policy, many were shocked to see a small group of agricultural specialists and lobbyists within the Parliaments Committee on Agriculture, Comagri, present a “business as usual” agenda of fiercely de-greening the EU-Commission’s reform proposal. Some of Comagri’s worst and most greedy proposals were rejected by the plenary, such as the idea of paying farmers twice for the same environmental measure and hiding from the public the amounts and recipients of subsidies.
Probably the most significant de-greening proposal of the Parliament is to reduce the proposed 7 percent ecological focus areas per farm to an initial 3 percent, extended to 5 percent by 2016 with only a feeble option to reach 7 percent by 2018. The Parliament also supported Comagri’s proposal not to require individual farmers but only member states not plough under additional permanent grassland.

Instead of improving an already flawed Commission concept of crop “diversification” by requiring mandatory crop rotation, the plenary followed Comagri in further weakening diversification to an extent that actually invites even more monocultures in Europe.

While the plenary of the Parliament broadly rejected Comagri’s attempt to erase the bigger part of all environmental and heath legislation, to which farmers must adhere in order to receive public payments (cross compliance), it did exempt important laws such as the water framework directive.

One notable exception was to allow national governments to voluntarily distribute direct payments slightly more equitably by topping up payments for the first hectares (maximum 50 ha) at the expense of the rest of hectares of bigger farms.

In addition to the anti-environmental aspects of the Parliament’s vote today not a single suggestion by its Committee on Development was adopted. Neither a final end to export subsidies, nor a monitoring mechanism of the CAP impact on international obligations in the development context was adopted.

The Parliament did not listen to the mounting calls from a very broad range of civil society organisations, ignored their arguments and failed to bring agricultural policy where it belongs: In the center of a broad and serious political debate on all of its aspects such as health, environment, climate change and energy, rural development, global fairness and chances of the next generation.

Instead, nationalistic bargaining arguments as has been the habit of agricultural ministers over the past decades, unfortunately have survived the opening of the CAP to democratic decision making. Agricultural policy, a vast majority of MEPs from all groups seems to have agreed, was simply too complicated and too boring to make a serious effort to understand its impact. The farm lobby had always preached that these 40 percent of the EU budget were incomprehensible and untouchable. Today the majority gave in and handed over the billions to the specialists and their vested interests.

Such ignorance of MEPs, soon to be documented in the roll call votes of today, may be remembered when it comes to their re-election in 2014. It should be a top priority within all the parties to improve the European Parliaments ability to understand all aspects of European food and farming policy and to listen to the voices of those Europeans struggling for a greener and fairer Europe and for good food and good farming – especially their young generation.