The extensive importing of GM soybean, used in large quantities in Poland as high-protein fodder particularly in factory farming, is becoming a political issue. Poland imports around 1.8 million tonnes of such soyabean every year. Starting from 2004 there has been a steady increase in soyabean grain imports from South America –  predominantely Argentina and Brazil. According to the notation in the Polish Fodder Act of 2006, a ban on using GMO in fodder is to be introduced on 1st January 2013. 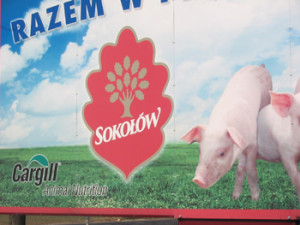 As a result, the Agriculture Ministry is under pressure from international grain trader lobbies that want to move this deadline imposed by the Polish Parliament. The Ministry is stating that: “around 90-95% of soybean available on the domestic market is genetically modified. Imposing a ban on its use would cause drastic shortage of protein fodder in the country and the decline of competitiveness in domestic animal farming.” Poland has developed a large dependence on this import. According to a study conducted by the Warsaw University of Life Sciences, only around 1% of imported soybean meal is non-GM, which means that transgenic grain importers have gained a monopolist’s position on the Polish grain market.

98% of soybean is imported to Poland from South America via the ports of Szczecin, Gdansk and Gdynia. The main importers, with over 60% volume, are companies owned by the international grain trading tycoons – Cargill (USA) and Louis Dreyfus (France). The question to be asked is whether or not the issue of high-protein fodder affects Polish food independence. Developing national production of conventional high-protein fodder plants may be an alternative to GMO imports and could ease the fodder protein shortages in Poland. Leguminous plants such as pea and lupin seeds not provide high-protein grain, but also play a very important role in agricultural ecosystems by enriching soil with precious nitrogen, improving the water conditions of soil and maintaining its proper structure.