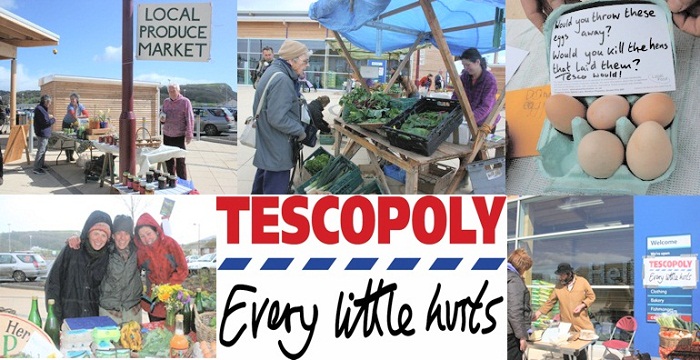 To mark the International Day of Peasant Struggle on April 17, a group of Devon food producers set up a local produce market in the car park of Tesco’s Seaton store. “Our small market is here to highlight the difference in food which is produced in a fair and healthy way,” said spokesperson Jyoti Fernandes.

“The food produced for sale at supermarkets is produced on farms where farmers are given a low price for their product and workers are sometimes exploited. The agribusinesses that supply the supermarket economy pollute the environment with the nitrate fertilizers and herbicides that are used in their farming systems.”

In Devon, Fernandes explained: “People go to supermarkets instead of supporting local producers, making it difficult for us to earn our livelihood on the land. The profits from its production, processing and distribution go to the workers and the community. We went to inspire people to have discussions on food and agriculture issues and to give the public a glimpse of the growing movement to take back control of our food and agriculture.”

Urging the public to buy from small farmers and local shops, the group reminded local people that: “Supermarkets move into areas, like this picturesque part of Devon – where there is an abundance local farms and shops – and drive them out of business by undercutting them on price and ‘convenience.’ They form a monopoly.”

April 17 commemorates the massacre of 19 peasants in Brazil, who died in the fight for land and justice. The Seaton action was one of hundreds organised around the world by the peasant alliance Via Campesina. “As farmers, smallholders, agricultural workers, producers and local shop keepers in Southwest of the UK, we are standing in solidarity with farmers across the world for this day of action in support of a sustainable food system.”

Professor issues warning from the US