In David Attenborough’s foreword to The State of Nature 2016, he writes: “…Nature is in serious trouble and it needs our help as never before.” The report singles out intensive agriculture and climate change as the two most serious threats to biodiversity in the UK.

Agriculture still occupies 75% of the UK’s land area and the declining fortunes of mixed farming has led to consolidation and specialisation on a massive scale at landscape level. It is hardly surprising then, that the environmental impact of farming should be an issue of public concern. 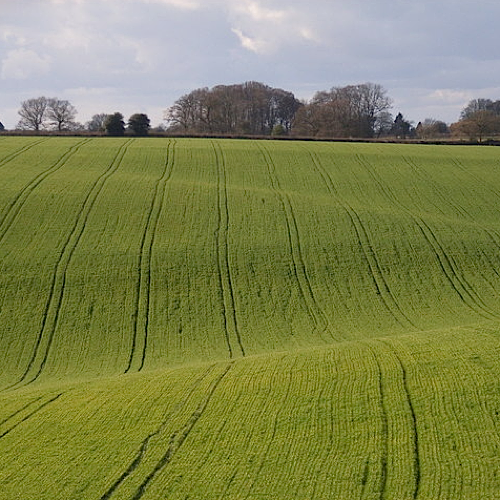 Look at this picture of a field with an over-wintered crop above: it is typical of thousands up and down the UK. Beneath the serried ranks of seedlings, criss-crossed with tracks that reflect the width of the spraying boom which passes periodically, countless farmland species struggle to adapt to what is often a hostile environment.

The State of Nature editorial team identify earlier planting and regular spraying as important underlying factors in the way intensive farming impacts biodiversity. The study draws on long term data gathered from all four corners of the UK by an army of knowledgeable volunteers: every year an estimated seven and a half  million volunteer hours go into gathering and processing data on more than 9,000 species across the UK.

Follow this link for a masterly presentation of the key facts, while the full versions can be downloaded here.  With input from more than 50 nature conservation bodies, it is a truly comprehensive observation-based overview of the UK’s biodiversity.

“Using modern Red List criteria, which identify species of the highest conservation concern, we assessed 8,000 species. Of these, 15% are extinct or threatened with extinction from Great Britain….One way of assessing how damaged nature is across the world is the Biodiversity Intactness Index Of 218 countries assessed, the UK is ranked 189”

To pick another of the many possible examples, some 59% of farmland invertebrate species are in decline. This is deepened by the adoption of uniform practices, such as winter sowing, at a landscape level. The uniformity of habitats in monocultures have two interlocking effects: there is less room for diversity, literally, while the fauna that is favoured by monocultures is both more specialised  (or less diverse) and potentially less resilient as a result.

The National Farmers’ Union (NFU) pre-empted the launch of The State of Nature with a predictable recycling of the sustainable intensification smoke screen. Vice president Guy Smith declared: “The NFU believes the sustainable intensification of agriculture will be an important tool with which farmers will help to make a significant contribution to the challenge of both domestic and global food security.”

He went on to explain: “This means using a spectrum of approaches which enhance yields and other ecosystem services by promoting better use of resources. For example, using technology to precisely apply vital plant nutrients or fine-tune livestock diets to reduce waste and inefficiencies in the system.”

But until the industrialised economies of the world internalise the environmental costs of their actions, the  two words sustainable intensification will continue to have the hollow ring of a marriage of convenience, cobbled together in a hurry by folk who want to be seen to be “doing the right thing.”

It would be churlish and counterproductive to suggest that the NFU does not care about the environment or pollinators. For instance, between them, NFU members have planted 21,000 acres (8,750 hectares) of floral habitat specifically to help struggling pollinator populations. But at a landscape level, the effect is somewhat spoiled by the NFU’s dogged demands for emergency neonicotinoid derogations for square kilometres of crops that leave a persistent and toxic time bomb ticking for pollinators.

All ARC2020 articles on the UK

Brazil: where the soy beans come from

The business-as-usual global warming ‘lukewarmist’ is no longer at the DEFRA helm. via Peter Crosskey. […]

Cutting space for nature on farms, from its own proposed level of 5% to just 4%, is the most brutal of adjustments mooted by the Department of  Agriculture, Food and the Marine (DAFM) in one of the final CAP consultations last Thursday.  A list of five for the most part unambitious eco-schemes has also been announced, which will do little to move Irish agriculture towards a more environmentally sustainable place.  […]