A cross-party committee of UK parliamentarians last week sparked a chorus of demands for the government to introduce a moratorium on “…pesticides linked to bee decline”. 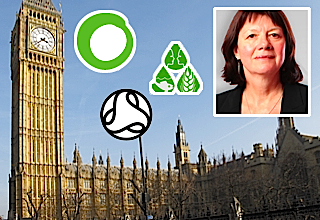 There is peer-reviewed scientific work that links the neonicotinoid family of pesticides to declines in pollinators in agricultural environments. Environmental Audit Committee (EAC) chair Joan Walley MP (pictured, inset) accused the environment agency DEFRA of being “…extraordinarily complacent…” in its approach to protecting bees.

She went as far as to say that: “DEFRA ministers have refused to back EU efforts to protect pollinators and can’t even come up with a convincing plan to encourage bee-friendly farming in the UK.” Other member states – France, Germany Italy and Slovenia – have already banned the use of some neonicotinoids: the EAC is calling for “…a moratorium on pesticides linked to bee decline to be introduced by 1 January next year.”

Friends of the Earth bees campaigner Paul de Zylva welcomed the EAC findings: “MPs have hit the nail on the head. The government needs to act urgently to address the threat posed to bees by pesticides and other key factors such as habitat loss.” He chided the government for its complacency and inaction: “What else are they waiting for?” The FOE campaign is asking supporters to add their names to an open letter to the government.

Soil Association head of policy Emma Hockridge also welcomed the EAC findings: “This report is another nail in the coffin of the Government’s position not to support the ban on neonicotinoid pesticides.”

She found the seemingly wilful deafness of DEFRA to scientific evidence appalling: “First, European expert scientific advisors have called for a moratorium, then the European Commission, and now this all-party House of Commons committee. Surely Defra Secretary of State Owen Patterson must now realise that he can’t be right and all these experts wrong? It is time he stood up for the bees, not the chemical companies.”

Pesticide Action Network UK director Keith Tyrell pulled no punches in his condemnation of DEFRA. “Today’s report is a damning indictment of DEFRA, who have hitherto chosen to bury their heads in the sand when it comes to neonicotinoids and bees.”

Tyrell is forthright in his call for a moratorium: “The scientific case for a ban on neonicotinoids and the promotion of alternative and sustainable methods of pest control in UK agriculture is irresistible.”

Environmental Justice Foundation executive director Steve Trent added: “The scientific evidence of the impacts of neonicotinoids was already overwhelming. But this new report by the House of Commons Environmental Audit Committee is also a powerful critique of DEFRA’s interpretation of the precautionary principle for economic rather than environmental protection.”

DEFRA’s arguments are intellectually threadbare, Tyrell contends: “They have cited lack of evidence as a reason to abstain. I sincerely hope [the EAC] report will put a stop to DEFRA excuses. They can and must defend bees, other insect pollinators and their natural ecosystems, in order to safeguard UK agriculture and our food security.”

As reported on this website recently, DEFRA’s own recent FERA study is neither peer-reviewed nor did the have a robust control group. Hardly a cause for complacency.

Responsibility shift: Pesticides producers to prove that their pesticides are harmless […]