Honey yields across England and Wales have plunged this year by an average of 72%, with regional year on year variations of between 78% in London to 53% in Northern Ireland, according to the British Beekeepers’ Association (BBKA). Almost all the 2,712 British beekeepers talking part in the 2012 British honey survey blame the weather for this state of affairs. The BBKA warns that British bees face a particularly difficult winter. 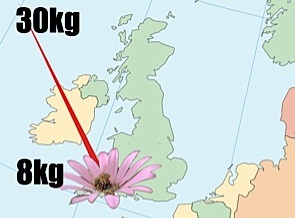 However, London BBKA secretary Angela Woods warned that bees need flowering plants as well as somewhere to live: “The results for the London area suggest that it was not just bad weather that was the problem. They may also highlight the lack of forage in the city for many bees.”

“Rather than putting beehives on office roofs, we encourage companies in London who want to help to look at different ways of supporting bees and beekeepers. We need more forage for the bees and better-educated beekeepers. Individuals can help too by becoming an armchair beekeeper and taking up the BBKA’s offer to Adopt a Beehive.”

While managed colonies across the country can look forward to additional food from beekeepers, wild pollinator populations face a harsh challenge over the winter months.

How does the UK regulate pesticide use? Peter Crosskey takes a closer look. […]

Trying to answer a seemingly simple question: What kinds of flowers does a bee like? […]