Here we present an exclusive English language summary of a new French government report on CAP. This gives an insight into CAP related thinking in the country, contextualised by Brexit. By Peter Crosskey.

Future plans for agricultural policymaking must allow for the fact that European agriculture faces growing price volatility, warns a French government report [1]. French parliamentarians have evaluated the implications of imminent factors, such as Brexit, as well as reviewing long term, historic issues. These will need to be addressed if European farming is to be resilient, rejuvenated and, above all, sufficiently diverse to ensure the food security of EU citizens and produce wholesome food.

From the outset, the CAP has set out to ensure adequate agricultural incomes, provide consumers with food at affordable prices, with a properly-equipped European agriculture that could ensure at the  very least a degree of self-sufficiency. For all the shortcomings of the CAP and its implementation in previous years, the French parliamentarians stand by these basic aims. But they warn that recent economic and social developments must be addressed in meeting the underlying objectives.

Farmers need stable incomes and economic visibility, which have been conspicuously absent  in the European dairy crisis of recent years. For this they need real bargaining power in downstream price negotiations with food processors and retailers.

European consumers should be able to know what they are eating and where it comes from. At a higher level, the parliamentarians contend that European citizens should be able to attribute some socio-environmental gains from the CAP in terms of counteracting climate change, preserving biodiversity and soil health. In this broader context, stakeholders in the agricultural sector need simple and measurable indicators to demonstrate the contribution that farmers are making to public goods.

The lawmakers were wary of simplistic solutions so, for instance, insurance policies against market volatility were regarded as a risky palliative, whereas existing mechanisms to stabilise farm revenues were considered relevant. Likewise, they did not engage in a wild goose chase for a quick fix to the problems associated with aging farmers and rural employment. Once again, they recognised that a number of tools are needed, including access to credit and disincentives for single-handed farming.

Above all, the parliamentarians adopted the watchword of legibility, meaning clearness of intent, in future phases of agricultural policy.  They urged clarity of purpose, rejecting the European Commission’s pipe dream of simplification for poorly-focused policy.

“All too often, farmers got the feeling that simplification was working against their interests and was being used to impose a standardisation that damages the diversity of European agriculture.” On the other hand, farmers would stand to gain from greater clarity in eligibility for funding, the enforcement of market regulations and stable agricultural policy. With about 50 different subsidy schemes in the CAP, the need for clarity and transparency in their presentation is essential and not just desirable.

Faced with Brexit, the rapporteurs remain convinced of the importance of cross-border policy frameworks, such as the CAP, to the future of the European project. The EU is the world’s largest food exporter (129 billion euros in 2015), with 11 million holdings that support just over nine million farmers. Looking downstream from the farmgate, the European food industry employs five million people, while a further 46 million are indirectly concerned in some way by the fortunes of European agriculture. One in five EU citizens lives in a rural area.

The UK’s exit from the EU will have a significant impact on the next phase of agricultural policy making, leaving a question mark hanging over the future EU budget to the tune of EUR 10 billion a year. According to the Institut Jacques Delors, member states will end up choosing how best to make up for the shortfall. The options are to increase national contributions, cut expenditure or an amalgam of the two.

With the multiannual framework negotiations scheduled to start in 2018, there will be heightened tension between net contributors and net beneficiaries from the EU budget, of which the CAP accounts for 39% at present. The UK currently receives EUR 6.9 billion a year from the European budget, of which 3.9 billion (56.6%) are allocated through the CAP, putting agriculture high on the Brexit agenda. 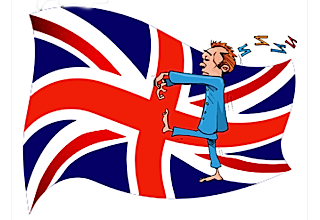 In the light of an apparent lack of concern at UK ministerial level as to whether the UK stays in the European customs union, it is worth noting that resorting to WTO trade terms will be as damaging for those who continue to export to the UK as it  will be to UK food producers attempting to export anywhere. The UK currently imports about half its food purchases: this proportion rises when you allow for imported ingredients that go into UK-manufactured foods.

The rapporteurs published a 2015 figure of 60% for UK food imports, priced at EUR  35.5 billion. In 2015, the UK ran a food trade deficit of EUR 21.6 billion, exporting food products totalling EUR 13.9 billion. The combined effects of currency swings, volatile food prices and tariffs that are based on the invoiced prices of goods at the point of entry suggests a recipe for mayhem. The French parliamentarians listened to the concerns of many associations and unions for whom the prospect of commercial chaos is already ringing alarm bells.

[1] The French National Assembly report number 4471 on the future of the CAP after 2020 is available in French at http://www.assemblee-nationale.fr/14/europe/rap-info/i4471.asp

Who is fuelling global food inflation?