In a letter published today, Dany Cohn-Bendit and Rebecca Harms, Co-Presidents of the European Parliament Green Group, have appealed to their fellow presidents of other political groups to set the record straight on the debate: Crop rotation versus crop diversification. They stress that it is an issue which “may appear as a minor detail at first glance, but proves to eventually have major impacts on the whole CAP reform and its agro-ecological impact”.

Cohn-Bendit, not particularly known as an agricultural expert in Brussels, writes: “We don’t see political disagreements on this issue, but would plead that common sense is sufficient to resolve it.”

Crop ‘diversification’ as proposed by the Commission and further amended by the Parliament’s Agriculture Committee (COMAGRI) would have little to no effect in breaking up monocultures, the two presidents point out:

In contrast, crop rotation means changing the crops planted on a parcel of land every year, over at least 3 consecutive years, before the first crop will be planted again. “Only this well-established practice of rotation will yield the benefits, mitigate climate change, improve soil structure and health, fertility and biodiversity,” they say.

Cohn-Bendit and Harms are therefore urging their colleagues to support an amendment of the Parliament’s Environment Committee (ENVI), which replaces ‘diversification’ with ‘rotation’.

While initial claims that crop rotation created problems with the WTO’s acceptance of direct payments had been withdrawn by the Commission, the administration insists that the “annuality” of payments stood against such a 3-year exercise, which would also be hard to control. However, many measures under the second pillar (including extra payments for crop rotation) are multi-annual by nature, argues a briefing paper by APRODEV – the EU association of church related development organisations, as well as a legal advice of Prof.Christian Häberli of the World Trade Institute (WTI).

Resistance against crop rotation from the Commission side seems to be dwindling. While Environment Commissioner Janez Potoċnik recently took a clear position in favor of crop rotation, Agricultural Commissioner Dacian Ciolos no longer seems to defend his own administration’s diversification proposal against the improved crop rotation scheme. 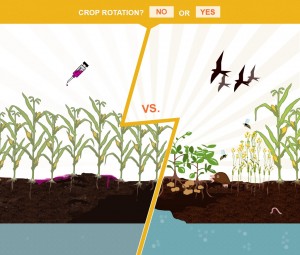 “While everybody in the environmental camp is busy with much needed damage control against COMAGRI’s full blown attack on nearly all aspects of Greening the CAP, here is a real chance for substantial improvement,” said Stanka Becheva of Friends of the Earth Europe, who have recently launched a special web-action in defense of crop rotation; adding “All that is needed is a vote in favour of the ENVI Committee’s amendment”.

The amendment, which had been dismissed by COMAGRI, will be re-tabled to the plenary vote by its rapporteur, Dan Jørgensen (S&D) and supported by colleagues from other groups as well.

We would certainly not have expected a notorious agro-sceptic in the European Parliament such as “Dany le Rouge”, to ever spell out the basic facts on crop rotation. But if someone like him can clearly see and support the arguments for rotation, this is very bad news for those who most-likely created the whole crop diversification scheme to diversify and confuse MEPs’ attention and avoid real greening.