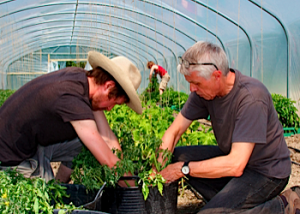 “Oxfordshire produces lots of food, but less than one percent of it is consumed within the county,” Doireann Lalor told the All-Party Parliamentary Group on Agroecology in Westminster on World Food Day. Doireann is a founder member of the Oxford-based group Cultivate, which describes itself as a people-powered food producer.

The project will soon be completing its first year, growing fresh vegetables on a five-hectare holding with two large polytunnels and lots of willing helpers. As vegetables are harvested, they are loaded on to a specially-fitted Veg Van, a mobile shop which makes scheduled visits around a local circuit, retailing to local residents and wholesaling to local restaurateurs.

“As well as our own produce, we carry other local products, generating another route to market for local food producers,” explains Doireann. Cultivate operates a wholesale side to balance the range on offer to households with what is coming off the holding.

“We had a heavy crop of cucumbers at one stage, which we sold on for pickling and then took some jars of finished product with us to sell on the Veg Van.” In this way, it has been possible so far to avoid veggie box blues, when seasonal gluts determine the contents of the box.

At the outset, Cultivate was able to tap into 300 backers with a community share offer that raised GBP 82,000 – well over the projected GBP 50,000 target. “When we launched our initial offer, people were saying that the economic situation was wrong for a launch, but it seems that at times like this, people are willing to invest in something concrete, local and tangible,” explains Doireann.

The challenges to keeping projects like Cultivate going come under five main headings:

Down to the Ground – Green Medicine for the People!

Health is a human right, not a privilege. Herbalists Without Borders work to deliver health justice to displaced and disadvantaged people via the powerful medium of herbs. Through valuing indigenous healing wisdom, producing medicine from plants gives vulnerable people a renewed sense of control over their environment and personal health. Herbalism also fosters a renewed connection to the landscape from which everyone can benefit. Ursula Billington has more. […]