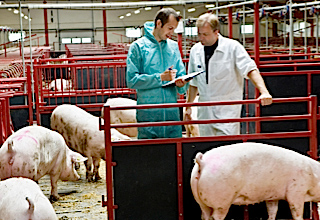 A yellow card system for Danish vets to identify pig farms with continual health problem has helped to generate a 20% drop in antibiotic usage since it was introduced in July 2010. The Danish Veterinary and Food Administration (DVFA) now sets threshold levels of medication for three groups of pig, above which producers are required to bring antibiotic use down to required levels within nine months, with additional veterinary supervision.

The Danish meat industry started curbing the use of antibiotics in livestock nearly 20 years ago, starting with a voluntary national ban on non-therapeutic use in 1998. The legislative sea change that preceded the ban was splitting the prescribing and selling of the drugs concerned. A Danish vet can prescribe antibiotics, but only a pharmacy can sell them.

Since 1995, the Danish Integrated Antimicrobial Resistance Monitoring and Research Programme, DANMAP, has been collecting data to measure the use of antimicrobials and resistance in bacteria. The biggest livestock sector for antibiotics in the country is pig production, which accounts for 80% of veterinary antibiotics in 2010.

We’ve had the case made for less meat, for better meat, so what’s the case for no meat? […]

Big day for the CAP in the European Institutions