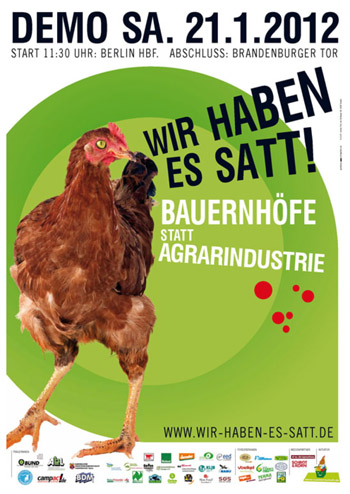 This Saturday sees the return of the demonstration ‘Wir haben es Satt‘ to Berlin. Last year 22,000 people attended and it is hoped more will this year. The event takes during the first weekend of International Green Week.

See the original (German) announcement here on the official website

Industrial agriculture has led to dioxin scandals, genetic engineering in food and animal suffering in mega stables. It exacerbates hunger crises, climate change and is causing farms to die out, leaving cleared land and monoculture.

Each year the EU and the German government support this industry with billions of Euros in subsidies.  With the key decisions for agricultural policy in 2020 currently being made, the chance to change current practice has never been so great. So far however the federal government has blocked real reform.

We demand that Chancellor Merkel:

– Stops the money supply to the meat industry

We value the daily work of people on farms. You must be at the center of a reform!

Therefore on the 21st January 2012, consumers, animal rights activists, environmentalists, beekeepers, farmers will all take to the streets together.

Methane emissions from rice play a significant but much overlooked part in global climate change, research shows. The German Development ministry supports research programs in Asia to counter the threat and help farmers. […]