“Our resistance against land grabbing begins today. Land speculation and the irresponsible exploitation of our soils have driven our rural communities into poverty, degraded our lands and made our children take the long highway of western immigration. As of today, we are fighting back against land grabbing, we will expose the ones responsible for its disastrous impacts, we will explain their strategies, but also our vision for a sustainable Romanian agriculture.” 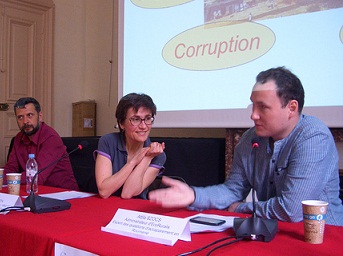 Listening to these inspiring words said by Dan Cismas, Romanian peasant and co-president of Eco Ruralis, we stepped into a conference room today in Paris to present the situation of land grabbing in Romania in front of several journalists from prestigious French newspapers.

The event marked the beginning of a European tour which will take us through several European capitals; the headquarters of large land investors. The targeted countries are Austria, Luxembourg, France, Belgium, Germany and the Netherlands. In our effort to raise awareness about this huge issue in Romania, we will meet with journalists, groups of concerned citizens, NGOs and associations along the way, linking our struggles, developing alliances and taking a common stand against large land investments made by multi-national companies for the sake of short-term profits.

Here in Paris we highlighted that:

Tomorrow we are in Vienna. Ahead of the event, we have prepared an interesting case: In the Top 5 of the largest landowners in Romania, we present, on the 5th place, Count Andreas von Bardeau, through its company Bardeau Holding which owns 26,000 ha of agricultural land and several thousands of hectares of forest.

Romanian milk farming: from one crisis to another. […]