Greenpeace is urging the European Union not to authorise herbicide-tolerant genetically engineered (HTGE) crops, stating that such crops lead to herbicide-resistant super weeds. 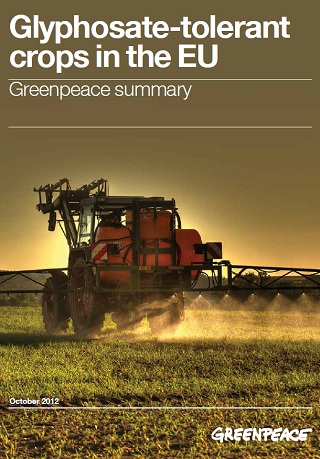 Greenpeace have commissioned agricultural economist Dr Charles Benbrook to produce their report entitled “Glyphosate tolerant crops in the EU”, which uses data based on the use of HTGE crops in US agriculture. Dr Charles Benbrook is a research professor at the Center for Sustaining Agriculture and Natural Resources at Washington State University.

The new report forecasts an increase in the use of the weed killer Glyphosate, often sold as the Monsanto branded name Round-up, by up to 15 times over a 14 year period (2012-2025) for HTGE corn, soy and sugar beet in the EU. According to Dr Benbrook, “Farmers in the US are already struggling as they try to spray their way out of the corner they’re backed into. The reliance on herbicide-tolerant crops in the US has triggered the emergence and rapid spread of nearly two dozen glyphosate-resistant weeds, driving up farm production costs, as well as the volume and ecotoxicity of herbicides needed to prevent major yield loss.“

The Greenpeace report was launched on 22nd of October in Warsaw, Poland, as the pre-cursor to an 18 day campaigning tour led by Greenpeace around Europe. Greenpeace and the US farmers hope to meet with farmer groups, local communities and national politicians at each tour stop to discuss their growing concerns over the HTGE threat.

“We’ve already seen what happened to the farming community in Argentina and the US, and Dr Benbrook’s report paints a vivid picture of what will happen here should these crops be authorised. Surely the European Commission will heed these warnings, reject applications for growing HTGE crops in Europe and substantially strengthen the risk assessment procedure for GE crops,” said Lasse Bruun, Sustainable Agriculture Campaigner at Greenpeace International.

US agrichemical and biotech giant Monsanto introduced the weed killer Glyphosate to the market in the 1970s under the Roundup trademark, reports Agence France Presse. Glyphosate is now out of patent and has become the most commonly used herbicide in the US and elsewhere. While the manufacturers of Glyphosate say it has relatively low toxicity compared with other herbicides, there remain concerns about its long term impact on the environment.