Neither European nor US manufacturers can demonstrate an economic case for pollinator-killing neonicotinoid pesticides. Meanwhile a proposed US law to ban these products has been becalmed in House-Committee-land and this year’s US National Pollinators’ Week ended with a full-scale investigation into a major bee-kill in the Oregon city of Eugene. 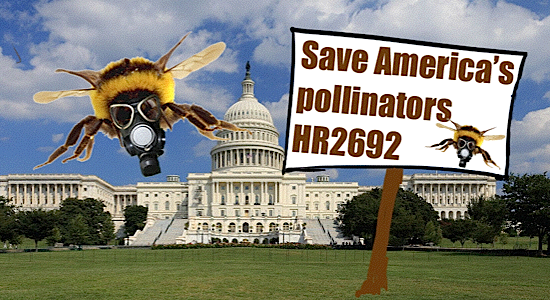 It is nearly a year since US representatives John Conyers and Earl Blumenauer proposed legislation to outlaw neonicotinoid insecticides. The Save America’s Pollinators Act of 2013 (HR 2692) was introduced to the House of Representatives last July before being referred to the House Committee on Agriculture. About a month later it was shuffled off to the Subcommittee on Horticulture, Research, Biotechnology and Foreign Agriculture for further examination at the end of April.

What the proposed legislation sets out to do is simple enough: it will suspend a class of pesticides and remove one of the contributing factors to the dramatic drops in pollinator populations. The need is clear enough. According to the Center for Food Safety, the Environmental Protection Agency (EPA) only ever issued a conditional registration in 2003 for clothianidin, before a robust field study of pollinator impact had been carried out. Ten years later, there is still no sign of any such industry data.

The EPA has since set itself a deadline of 2018 to complete a review of the main neonicotinoids currently in use. Conyers and Blumenauer are also insisting that the EPA should carry out a root and branch review of the scientific evidence used to justify any further neonicotinoid authorisations.

Even the promise of such reviews is too late for billions of pollinators: HR 2692 was launched less than a month after a major bumblebee kill. An estimated 50,000 insects died after flowering lime trees shading a car park were sprayed in Portland, Oregon. Shocked shoppers gathered to vow that such an event would never happen again: for a while there was public awareness across the country.

Recognising the role of wild pollinators, Conyers and Blumenauer had also written requirements to monitor native bee populations into HR 2692, which would trigger full-scale investigations into incidents like the Wilsonville car park, where the sprayed lime trees had now been shrouded with a close-mesh netting. This year, during the US National Pollinator Week, the Oregon city of Eugene was investigating a bee-kill in which 17 flowering lime trees were reportedly sprayed on Monday. As happened at Wilsonville a year ago, wild pollinators have been hit hardest by the unthinking use of pesticide.

Earlier this year, the Center for Food Safety reviewed 19 peer-reviewed scientific publications on neonicotinoids to correlate the commercial gain from using this particular group of pesticides. Despite all the marketing spin used to sell neonicotinoid seed dressings and other products, their value for crop protection or maintaining crop yields was actually negligible.

The Center for Food Safety findings corroborated European evidence that crop yields were not adversely affected by the use of undressed seed. Co-author Peter Jenkins explains: “The environmental and economic costs of pesticide seed treatments are well-known. What we learned in our thorough analysis of the peer-reviewed science is that their claimed crop yield benefit is largely illusory, making their costs all the more tragic.” Download the full study.

Europe has yet to even consider such a basic evaluation, international pollinator expert Dr Dave Goulson told ARC2020. He attended meetings with the USDA and other bodies as part of the CFS report launch in March.

Writing in his blog, he explains that: “Remarkably, no similar studies seem to have ever been performed in the UK or elsewhere in Europe to evaluate how much, if at all, neonic seed dressings increase yield here. It would be easy to do – experimental plots of crops that are treated exactly the same, except for the presence or absence of the seed dressing.”

Armed with its findings, the Center for Food Safety attended a hearing on April 29 of the Subcommittee on Horticulture, Research, Biotechnology and Foreign Agriculture. What they heard (and did not hear) disturbed them since all four witnesses testifying before the sub-committee ignored any linkage between the use of pesticides and the health of pollinator populations.

California produces 80% of the internationally-traded almonds in the world, according to Arthur Cummings, chairman of the Almond Board California Bee Task Force. He explained that the Californian almond crop required two thirds of the currently available commercially-managed bee colonies in the US to pollinate one of the country’s earliest crops. It should be added that the same bees are transported on low-loaders to pollinate blueberries in Maine and citrus in Florida. Some of these insects spend more time on the road than show-business celebrities.

The recurring focus for the experts was the control of varroa mites in managed colonies, for which there is a range of products on sale. Wild pollinators have a proven economic value in agriculture, but are relegated to a vague and unspecified Plan B, in the absence of any way of managing their activities.

UK government flies in the face of science

What impact for the CAP in the world?

Landmark court case in Agentina for campaigners fighting against spraying of pesticides on soya. […]

Current legislation on pesticide use and data collection is insufficient both for reaching reduction targets, and for assessing whether or not the goal was even reached. Now, a leaked version with new elements of the proposed reform to the Sustainable Use of Pesticides Directives (SUD) has escaped into the Brussels bubble. The document outlines options for planned reforms by the EU Commission set for March 23.  So what’s in the leak?  Ashley Parsons reports. […]