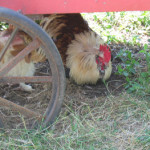 At the beginning of the 21st Century more and more experts are coming to the conclusion that agricultural biodiversity is at the crux of several societal trends and concerns that have gradually surfaced over the last decades.

Poland has a long lasting tradition in protecting the genetic resources of farm animals, which is why it is an essential contributor to the European Union’s list of indigenous breeds and varieties of animals, complementing its genetic resources with valuable species. Numerous genetically varied poultry populations covered by the animal genetic resources’ conservation programme were threatened with extinction in the 1970s, when the domestic poultry industry began to develop a Western model of industrial rearing methods. Domestic poultry breeds and families with lower productivity were pushed to the margins of the business activity which meant extinction of many valuable populations that were well adapted to the local conditions: many of these qualities have now been lost.

As the animals belonging to indigenous breeds and varieties constitute unique material for studies, particularly on DNA polymorphism, serum proteins, embryonic karyotypes, etc., they are of great importance to science. Therefore, in Poland actions aimed to protect these populations have been taken. According to the Polish National Research Institute of Animal Production in the 1970s, ﬂocks of indigenous and local poultry breeds were inventoried and their genetic and production characteristics were developed. In order to restrict an unwanted increase in inbreeding, the ﬁrst programmes on conservation of indigenous poultry breeds containing protection methods, plus the necessary minimum number of populations and an appropriate mating system were developed. Poultry populations threatened with extinction are protected by means of the in situ method – consisting of the protection of live animals in their habitat, in several ﬂocks with a preference of a region where it was created.

In Poland there has also been a recent increase in farmers’ interest in rearing hens of indigenous Polish breeds: this is another step in the right direction.