Until August, the Mozambican government is taking applications from Brazilian agribusinesses for land rights to set up intensive farms across an area in the north east of Mozambique. The area, known as the Nacala corridor, extends northwest from the deepwater port of Nacala to the borders with Malawi and Zambia, covering an area of 106,600 square kilometres (larger than Iceland). 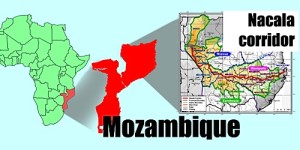 The north of Mozambique has already seen forced resettlements in the wake of opencast coal mining operations being carried out by Brazilian mining corporation Vale and transnational Rio Tinto.

The Mozambican, Brazilian and Japanese governments have been working together since 2009 to oversee a project called ProSAVANA-JBM (Japan, Brazil, Mozambique). Japan is providing deepwater port and rail infrastructure; Brazil is supplying agribusiness know-how fresh from the cerrados and Mozambique is making available savannah grassland that is supposedly empty, or will be cleared soon.

The object is: “…the transformation of today’s farmers shifting cultivation to settled cultivation by introducing intensive farming system.” This is a land grab of fertile and productive arable land that has been farmed sustainably for generations by the four million plus people who live there, but who face resettlement to make way for foreign agribusiness with freshly-issued land rights.

The EU is a major source of aid for Mozambique, one of the poorest countries in the world, but rapidly preparing an extraction-fuelled bonanza for the corporate world. The EU is funding a development corridor further south, to the port of Beira, with the support of Member State governments.

Last summer, European Commission president José Manuel Barosso visited Mozambique for talks with the Mozambican government, during which he announced further aid packages for the country. This includes a EUR 9 million project to promote government accountability for its citizens. This worthy document includes a reference to: “The need for political inclusivity in a post-conflict society is critical for reconciliation and reconstruction,” but overlooks the fact that political inclusivity in rural areas includes access to land.

The European Commission recently deflected questions from ARC2020 about whether there was any prior knowledge of the Nacala Corridor project in Brussels.

It is not clear whether the Commission made an effort to press the Mozambican government as to its long term policy to feed its people. Rebuilding colonial infrastructure to extract cash crops never fed local populations in previous centuries, and is unlikely to do so in the twenty first century. For the Mozambican government to start turning millions of people off the land in the weeks running up to a general election speaks volumes for its grasp of accountability as the body that owns the land on behalf of its citizens.

You can read more about this story on GRAIN’s website here. GRAIN is a small international non-profit organisation that works to support small farmers and social movements in their struggles for community-controlled and biodiversity-based food systems.

A report provisionally adopted on 27th April by the European Parliament make a specific call on the EU Commission to fight land concentration. […]