As much as 10% of Romanian farmland could be in the hands of multinational businesses, but there are no official statistics to establish the full extent of the corporate takeover. Speaking at a Green Day event in Berlin, organised by ARC2020 just a couple of days before the January 19 demonstration, Romanian peasant leader Willy Schuster and ARC2020 correspondent for Romania Attila Szocs demolished the corporate platitudes of Germanagrar co-founder Simon Wolk, who suggested that two hectares was not a big enough holding to be profitable. 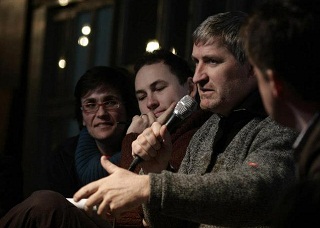 “What we have is worth more than just money,” Schuster snapped at Wolk, who made heavy weather of a heated round table discussion. During the debate, he admitted that Germanagrar had this year paid contracting peasants just EUR 140/hectare or 600kg of wheat per hectare for the use of their land under the terms of poorly-explained and often murky contracts covering ten years or more. “They are strangling us” Schuster added. 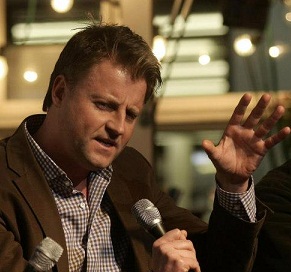 Since Romanian law forbids foreign nationals to buy land, landgrabbers need to engage go-betweens, like Wolk, to carve industrially-scaled holdings out of the Romanian landscape. Referred to politely as ‘scouts’, these negotiators prey on vulnerable peasants with spurious talk of “investment” and“opportunities” which Schuster’s peasant organisation Eco Ruralis is working hard to debunk.

Attila Szocs is researching all available sources for information on this murky business. “If you want to end one of these contracts, the penalty is EUR600 to 700 per hectare. The hundred odd euros for a hectare might just cover the price of a ticket to Spain, to pick strawberries,” he growled at Wolk. 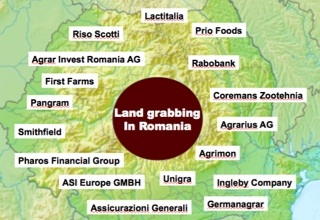 Since the turn of the century, land prices have tripled: this excludes all but the wealthy from acquiring land. Szocs has identified a number of major corporates that have set up farming operations in Romania: many of the names will be familiar to industry watchers and their modus operandi suggests official connivance.

In the process, monocultures and pollution are displacing a scientifically-recognised farming model with fertile soils that have not yet been subjected to modern treatments.

Accounts of similarly manipulative practices are also surfacing in other east European member states, notably the former GDR laender and Poland. These regions also have excellent soil that is coveted by corporate operators whose own soils have been exhausted by industrial farming.

A number of NGOs have come together to request that the 2016 Work Programme of the European Commission includes the Land as a Resource Communication. […]

“In the times of Communism, 70% of land was State owned. Just 20 years later and Polish farmers cannot buy land anymore” […]