A people’s jury in London convened on May 12, in an event organised by Food Research Collaboration and Coventry University’s Centre for Agroecology, Water and Resilience (CAWR). They listened to evidence on how Brexit would effect agri-food in the UK. So what did they hear? And how did they vote?

The day started with Joan Walley, former chair of the UK parliament’s environmental audit committee. She complained that the referendum campaign was a “distraction” from bigger problems. “The April COP21 agreement needs to be applied to food,” she explained, adding that the EU water directive was an essential prerequisite for any meaningful food policy. 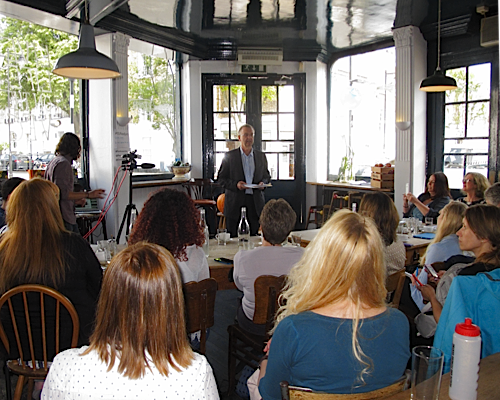 Professor Tim Lang (pictured, right) works at the Centre for Food Policy at City University (the only academic centre on food policy in Europe). He will vote to stay in the EU, but as a critical friend. “I’ll still go on criticising the European structures, arguing only by being in can we hold it to democratic account.”

Whatever Brexiteer economists might claim, there can be no going back to the delusional view that triumphed over mid-nineteeth century British politics, Lang argues. Industrialists and pro-trade politicians believed global trading should supply industrial Britain with cheap food. So they abolished tariff barriers to grain imports (the Repeal of the Corn Laws in 1846). It took two world wars to bring UK food politics to its senses.

It makes sense to grow food ourselves –  the Brexiteers want to abandon farming again, warns Lang. Cheaper food from abroad,whatever the externalised costs, and a roll back of tough environmental, consumer safety and animal welfare standards. Sustainability is the real challenge for post-industrial societies. That’s what our attention really ought to be on, Lang emphasised: “Dietary shifts over the past century are simply not sustainable; nor is much of how we grow and process food. We mustn’t let a deep schism in the Tory party blow up the democratisation of food policy. Fed by simplistic media coverage so far, the Brexit circus is not helping UK consumers face the transition to more sustainable diets and supply chains.”

Echoing Joan Walley’s earlier reference to Brexit as a “diversion,” Lang went on to remind the jury that the UK food production is now just 52% and we have an annual GBP 21 billion food trade gap to fund every year, which includes a lot of the fresh produce needed to improve the national diet. Nor do cheaply-priced processed foods reflect their impact on spiralling health and social budgets.

On-pack nutritional information and controls on water pollution are EU success stories, explains Lang, “…but it took a 25-year fight to get them.” The companion struggle to get carbon footprinting information on food products was unsuccessful, although some consumer goods do now carry environmental data. Food also means employment for 3.6 million people in the UK. Lang accused UK food industry management of being “chickens” for their collective failure to defend the interests of the workforce.

He concluded that Brexit is an inherently risky process, about which nobody can have any certainties. “It’s not all about money, it’s also about who we think we are. Our food has been improved by EU culture, easy access, holidays, culinary change. British children’s favourite food is pizza. Where do they think that comes from?!”

Organic farmer and Riverford founder Guy Watson is critical of the  CAP but even more concerned by the possibility of a Brexit. “We need to import European vegetables,” he told the jury, “and my experience of trading outside the EU is a nightmare.” Supplying thousands of veggy boxes every week, Watson has a staff of 600, a third of them from recent member states. They are an indispensable part of the workforce, working in the Riverford fields and packhouses. “Europe has failed to listen to working people on immigration,” Watson comments.

“If you’re not at the table, you’re on the menu.” Professor Erik Millstone

University of Sussex’s professor of science policy, Erik Millstone, is in favour of European unity to preserve European peace and is quick to counter myths about Brussels. For instance, the UK government employs more civil servants to run Scotland than the European Commission employs staff for all its functions. He also warns of the need to avoid conflicts of  interest in policymaking. A policy based on the recommendations of a stakeholder group for subsequent implementation and policing by the same stakeholders can have disastrous consequences, as the BSE crisis made abundantly clear. 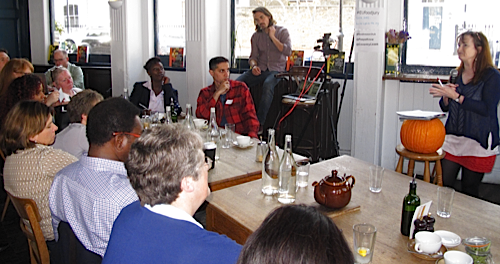 War on Want sustainability campaigner Vicki Hird warned that the likely outcome of a Brexit would be falling food safety standards. UKIP and tory Brexiteers alike are eager to find an excuse to build a bonfire of rule books.
Senior analyst for Agra Europe Alan Bullion told the jury that a Brexit could cost farms between 17% and 48% of their current incomes, depending on the sector involved. These were the headline figures from the recently republished Preparing for Brexit special report, for which Agra Europe used farm income data prepared by the Cambridge Department of Land Economy for the UK environment ministry DEFRA.

This dataset distinguishes four revenue streams: farmgate earnings (agricultural production); non-agricultural income (eg farm tourism); environmental subsidies (eg pillar 2 funding) and Basic Payments (pillar 1 funding). Many farms are completely dependent on Basic Payments to stay in existence: these would be the first casualties in the event of the UK dropping out of the CAP.

So how did the Jury vote?

The 13 person pop up panel voted decisively in favour of staying in Europe, rather than face the disruption a Brexit would inevitably cause to the UK’s food system.

After hearing evidence from half a dozen food witnesses, only one juror supported a Brexit and seven chose to stay in the EU. The remaining five wanted to find out more about European food policy following the day’s programme.

Earlier in the day, Bullion had attended a meeting addressed by former farm minister Owen Paterson. Worryingly, just weeks away from the vote, Paterson seemed to have no more than a sketchy vision of how the UK might operate in a top-down framework comprising Codex Alimentarius, the International Plant Protection Convention, World Organisation for Animal Health (OIE), and similar international bodies set up 20 years ago in readiness for GATT.

Note: pro-Brexit speakers were invited, but none attended, according to the organisers.

Attempting to understand reasons for wanting to leave EU. Many pro-Brexits invited to speak today but none accepted. #eufoodjury

UK prime minister Theresa May addressed he political party, the ruling Conservative party, at their conference at the start of the month. She tried to reassure the warring factions of that party that her plans for Brexit were on track. It’s clear she favours a hard – that’s complete – break from the EU, and not a soft – that’s partial – separation. […]