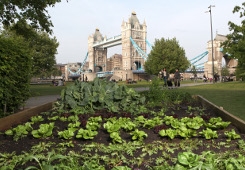 “Cities were never built to grow food, but as places of consumption,” London Food chair Rosie Boycott  told the All-Party Parliamentary Group on Agroecology on December 6. One consequence is that “…we are walking into food security issues with our eyes shut.”

Some of this is an education issue: “A lot of it is about our attitude to waste, which comes from not knowing about food,” she explained. “Food has become dissociated from its origins.” The task ahead of London Food is to transform local communities through food, setting itself a target of 2,012 new growing spaces before the London Olympics open.

“It has to be vegetables, not allotments,” Rosie added. The results have included gardens in skips (which have been moved around, too); street orchards and canal bank vegetable patches. In all, the project has put 50 hectares of land into production and involved 50,000 Londoners, across 21 boroughs and housing associations.

Next year will see the first hives going into city locations with the Capital Bee project. The vegetable garden outside City Hall has never been vandalised and Rosie notes there is a calming influence: “…obesity levels go down, crime levels drop and there is community cohesion.”

The European Parliament (EP) voted Wednesday to include what is called Indirect Land Use Change (ILUC) considerations in its biofuels targets. What effect will this have on the EU’s renewable energy, climate change and also on land use? This European Parliament vote means that the real climate impact, due to displacement of food production, will be taken into account in the EU’s biofuel targets and policies. A cap of 6% on land-based biofuels, including energy crops, has been adopted. According to Terhi Lehtonen environment advisor Greens/EFA group: “This would be the minimum necessary to take real measures to tackle the climate, food security and other social impacts due to displacement of food production that is caused by EU biofuels policy.” Lehtonen adds: “The EP vote also signalled to the markets that future investments should be on biofuels with low-ILUC risk and no food based fuels should be supported after 2020.” How did the vote go? See votewatch here Background Biofuels are liquid fuels made mostly from crops which can be mixed with fossil fuels to […]

#SoilMatters – so how best to treat it? In this debate we welcome both big and broad takes on best approaches, as well as detailed analysis of specific agri-industrial inputs and their soil impacts. We will feature soil experts, farmers, stakeholders of varying styles and approaches in this #SoilMatters debate. We aim for a wide range of perspectives. Join in now! […]