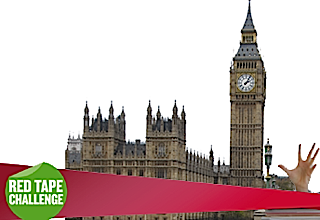 According to provisional select committee evidence  submitted by environment minister Caroline Spelman last week, the red tape challenge consultation has generated about 200 recommendations on agriculture. The environmental recommendations will be reviewed “…I think in March.”

The minister was evasive in answering the committee’s questions as to meetings between the Cabinet Office, presided over by former Thatcher adviser Oliver Letwin, and Spelman’s ministry, the Department for Environment, Food and Rural Affairs (DEFRA). The Commons Environmental Audit Committee wanted an assurance that the UK’s environmental regulations were not going to be condensed into a 50-page document: Spelman said she: “…not in a position to confirm or deny a story in a newspaper.”

Green MP Caroline Lucas asked how Spelman would respond to a Cabinet Office suggestion that the UK’s environmental regulations should be condensed into 50 pages. Spelman stonewalled: “…I am not answering a hypothetical question.”

Unlike her Cabinet Office colleagues, however, Spelman made the distinction between UK and EU legislation: “I am talking about domestic regulation now; this does not cover European regulation. Of course, an awful lot of environmental and agricultural regulation is determined at European level – 80% of it.” The minister also confirmed, under repeated questioning, that DEFRA and the Cabinet Office did meet, a point that had been contested in the wake of a blog post published by The Guardian.

Lucas later said: “I don’t know which is more worrying – the fact that Oliver Letwin has reportedly proposed slashing all environmental guidance so it fits into a 50 page document, or that the Secretary of State for the Environment appears to have had no knowledge of it.”

Last year, Lucas warned that the so-called ‘red tape challenge’ was nothing of the sort. On her website she wrote: “This exercise isn’t really about cutting ‘red tape’ and ‘listening’ to the public – it’s an opportunity for the Conservative-led administration to refocus the political debate predominantly in favour of business interests and deregulation.”

Here, for the record, is the answer (in extenso):

“We have regular meetings with DEFRA at all appropriate levels on all relevant issues. All views registered on the RTC website will be considered.”

Report from the All-Party Parliamentary Group for Agroecology – November 15th […]