Polish farmers are currently blockading towns in Northwest Poland in order to stop the government from leasing off prime farmland to multinational corporations. The farmers are protesting against are seeing many law regulations as a cause of small, local businesses to go under, giving precedence to the large farms, supplying big foreign own supermarket chains in Poland. 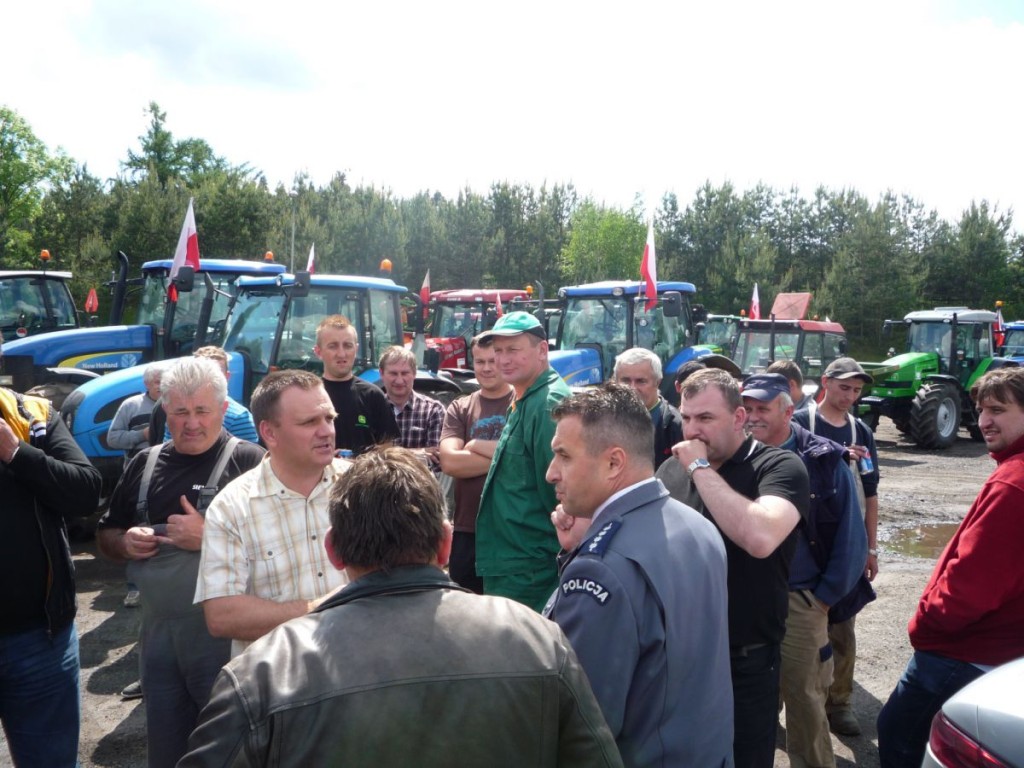 The battle of Polish farmers has continued for several years now– and their tractors have been blockading the State Property Agency in the city of Szczecin on the German border since 14th January, 2014. This is a desperate effort from the farmers to stop the government from selling off prime farmland to multinational corporations.

According to the Solidarity of Farmers Trade Union: “In the times of Communism, 70% of land was State owned. Just 20 years later and Polish farmers cannot buy land anymore. Most of it has landed in the hands of foreigners – mainly Danes and Americans.” One of our demands is changing the regulations allowing foreign companies to buy land in Poland. The State policy should instead help our family farms and help them to develop, Jan Zawisza – leader of Solidarity of Farmers in Kielce Region – told Echo Dnia newspaper .

The State Property Agency was founded in Poland in 1991 after the dissolving of the State Farm Communist system. The Agency then got 4,7 million hectares which were supposed to help family farmers to enlarge their farms. Instead, many thousand of hectares were leased to foreign companies; now among the biggest recipients of Common Agriculture Policy money are Danish Poldanor and Top Farm – part of Spearhead International Ltd.  Having 75 thousand hectares in Britain and Eastern Europe.

Land grabs by multinational corporations are becoming more common around the world as corporations look to establish themselves on foreign soils and exploit the resource base in order to increase their export opportunities.  Along with the process of land concentration, the processes of intensification in agricultural production occurs simultaneously, with increased use of pesticides, antibiotics in animal husbandry and controversial GMOs as animal feed. This in turn also helps the spread of monoculture of crops (oilseed rape and cereals), endangering biodiversity.

Last year farmers met with the Polish Minister of Agriculture, Stanislaw Kalemba, but the official policy which discriminates against family farmers was not changed – according to the organisers of the protests.

For more on this story:

Written By: Stella Beghini, Agrobiodiversity Campaign Intern for Eco Ruralis  At the recent International Forum on Agroecology held in Mali, delegates of peasants and many other groups from all over the world strongly addressed the roots of the crisis concerning our natural and social systems. They claimed agroecology as the real solution to reach environmental justice. The challenges and opportunities of how agroecology can be achieved in Eastern Europe is essential to growing this international movement. The Nyéléni Center in the Malian village of Sélingué held its first Forum in 2007 where food sovereignty was first conceptualized as a holistic approach and vision to agrarian justice. Fast forward to 2015, another meeting of diverse and united groups of peasants, indigenous people, fisherman, agricultural workers and others was held to work on reaffirming agroecology as the solution to mend our broken food and social systems. The delegates pointed out the many challenges that peasants around the world are facing nowadays: the loss of control over natural resources, land and whole knowledge systems that are the basis of our traditions and […]

Progress is being made towards land access – and against land concentration – in the EU, with a consultation by the Finance Directorate General.You can read the DG FISMA consultation document and submit your own feedback. Closing date for submissions is very soon – the 7th July. […]

To cull or not to cull? As Poland’s battle with African Swine Fever rages on, state-sponsored efforts to decimate the wild boar population have polarized public opinion. In part 2 of this series, Igor Tomasz Olech examines the two sides of the culling story. […]