It’s an odd but inescapable irony in Romania that the main stronghold of sustainable agriculture is held up by the least sustainable of sources: those tied to the land by the limitations of old age and persistent poverty. 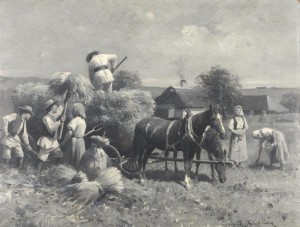 Yet this seems to be the model on which the government is prepared to rely. Farmland eligible for High Nature Value subsidies in Romania is reserved almost in its entirety to the hilly landscapes of Transylvania which remain impenetrable, or at least unprofitable, to the large farms that have swallowed up much of the rest of the country. Meanwhile, permanent pastures, supposedly a focus of the new, ‘leaner, greener’ CAP because of their importance in maintaining heterogeneous habitats, continue to be ploughed and transformed into arable land at a tremendous rate in all areas but where the population is compelled to keep them by the mixed blessings of the higher subsidies and lower labour efforts that permanent pastures afford.

The market plays little role in the land use decisions made by small hold farmers in Romania these days – their trade has been pushed so far to the fringes of the food market that potential profit from food sales falls low on the agenda for most peasants. Instead, the use of land is chosen primarily on the basis of the subsidies it opens up. As such, according to a recent study done by Milvus Group, pastoral and hay meadow farming, though up to 9 times less profitable than arable farming when taken at market value, brings in more money for a small holder than they would make though arable farming.

There are other influential factors here as well. Pastoral farming subsidies reward the use of the traditional methods (harvesting hay by scythe) and low intensity grazing (less than 6 sheep per hectare or 1 cow per 3 hectares). These are, invariably, the only options open to small hold farmers and so they find themselves profiting from the use of farming methods to which they are tied through poverty. Arable farming subsidies on the other hand make no concessions for traditional methods (ploughing by horse or oxen, planting traditional seeds). As such, many farmers are driven below the profit line, even with subsidies included, due to the expenditure needed to rent machinery.

Finally, the ageing population – with a mean age of 56 across the country but considerably higher in the hills of Transylvania – has a substantial influence. According to the Agency for Payments and Intervention in Agriculture, many elderly farmers are converting their land from arable to pastoral as it offers less physically strenuous work.

The result of all this is that throughout much of Transylvania, we are seeing an increase in permanent grasslands and high biodiversity hay meadows. For Transylvania’s wildlife, this is undoubtedly a good thing. Many bird species – from the famous corncrake through almost all birds of prey to the bellowed white stork- rely on these areas and would be pushed towards extinction without them. They are also the last refuges of many rare plant species, including orchids, and of rare reptiles like the endangered the meadow viper. Indirectly, their importance stretches further afield, providing the ecological services of carbon and nitrogen storage, flood, disease and drought protection and pollinator support that are essential to a functioning environment.

Yet this exists in a geographical and ecological bubble. Where the land flattens out, compensation payments for environmentally sensitive farming disappear almost entirely, available in only a few very small areas. The resulting difficulties for small holders to make any kind of living, combined with the increase in pressure from agri-investors looking to buy up large tracts of land, have led to a disappearance of permanent grasslands at a terrifying rate. The stipulations of EU accession, which states that Romania should keep in place all grasslands which existed before 2007, appear to make little difference.

This conservationist approach, of course, has no basis in ecological necessity – the lowlands of Romania once offered habitats to the widest variety of wildlife in the country and, in the few areas that remain protected, they continue to do so. Though Romania has become known internationally primarily for the large carnivores that inhabit the country’s mountains, it is the lowlands of the country which are most ecologically unique, containing three distinct biogeographical regions – steppic, pannonic and Black sea – each with their own ecologies and unique wildlife. For many of these species – the Red-footed Falcon, Great Bustard, Roller and European Ground Squirrel to name a few – the preservation of Transylvania’s sub alpine and montane grasslands offers little consolation as the animals require conditions that only lowlands offer. As such, they slip ever closer towards extinction.

But for the Romanian government, the vast majority of these lowlands are ecologically disposable – their priorities lie in encouraging land concentration and foreign investment over all else. Unfortunately for wildlife, the highly fertile soil which encourages such rich biodiversity of species throughout much of the lowlands also provides the most fertile conditions imaginable for intensive agriculture.

To meet the greening requirements imposed by the CAP – for which Romania has managed to negotiate among the loosest regulations in all of Europe – the ministry of Agriculture relies on the small holders in the hills who uphold biodiversity levels by necessity. That these farmers are kept in poverty seems to suit the ministry’s agenda, for now. That it is not a model of ecological, social or sustainable viability appears to be something with which they are not particularly concerned.

Luke Dale Harris writes for numerous publications, including the Guardian, the English Edition of Der Spiegel and the Huffington Post and he is also media editor with Milvus.

About Luke Dale Harris 3 Articles
Luke Dale Harris writes for numerous publications, including the Guardian, the English Edition of Der Spiegel and the Huffington Post and he is also media editor with Milvus.

A report for the European Parliament’s Agriculture and Rural Development Committee has called for an end to payments based on historical references, known as entitlements. Instead, a more uniform system, one fairer to younger farmers, should be introduced. […]