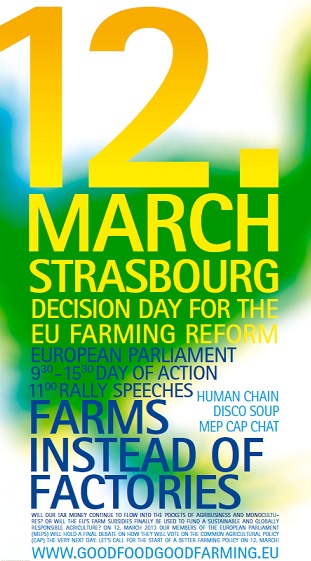 DECISION DAY FOR THE CAP: ACTION DAY IN STRASBOURG

On 12th March 2013 our Members of the European Parliament (MEPs) will hold a final debate on the Common Agricultural Policy (CAP). On March 13th, they will vote…

We will be there to find out. Come and join us on the 12th for a day of action including a human chain around the Parliament and open cooking of a ‘Good CAP Soup’ to be shared with MEPs. Costumes and banners welcome!

The action will take place from 9.30 – 16.00 in front of the Parliament. The grand finale will be the human chain around the Parliament building at 15:00.  More information coming soon.

Farms instead of factories

DECISION DAY: FARMS INSTEAD OF FACTORIES

Where: In front of the European Parliament in Strasbourg

Will our tax money continue to flow into the pockets of agribusiness and monocultures? Or will Europe’s farm subsidies finally be used to fund a sustainable and globally responsible agriculture?

On 12 March 2013 our Members of the European Parliament (MEPs) will hold a final debate on how they will vote on the Common Agricultural Policy (CAP) the very next day. And on 12 March 2013, we will be in Strasbourg to continue our call for the start of a new agricultural policy!

Our MEPs must ensure that funding will only be given to farmers who rotate their crops, maintain their meadows and pastures, and use at least seven per cent of their land to attract greater biodiversity. Family farms must be specifically supported and cost covering prices for producers must be ensured. We appreciate the daily efforts of people working on farms: they must be at the centre of the reform! We need diversity not monocultures; farms not factories!

In addition, export subsidies must be abolished and the impact of agricultural exports and imports on small farmers in developing countries must be monitored.

Join the action! Let’s create a colourful action with many posters and costumes in front of the Parliament – and demand diversity in our fields.

Bring your vegetables for a ‘Good CAP Soup’! Let’s show our MEPs what the right ingredients for the Common Agricultural Policy (CAP) are. During the Disco Soup action we will cook a fiery soup together, to be dished up for MEPs during the lunchtime CAP-Chat.

Become a link in a human chain around the Parliament building! Let’s form a human chain with hundreds of activists carrying our messages for the MEPs from all sides. For this to happen, it needs many people to participate. Bring your friends!

Do you still have time to stay on Wednesday 13 March? This is when the actual vote will happen in the EP. Using the theme “Noah’s Ark” let’s go on an agricultural boat tour to the EP leaving from Strasbourg’s historic center at 10.30.