Sustainable production of high quality food in small-scale agriculture is key for the development of Danish rural areas. This is the claim made by a group currently developing a vision for Danish urban and rural development towards 2030. The group, which includes artists, small and large scale farmers, and research centre directors, was set up by the Danish Ministry of Urban and Rural to address the financial and cultural imbalance in Denmark. 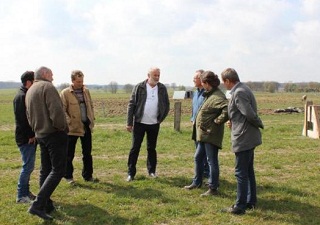 People with higher education and high incomes have increasingly settled around major cities with universities or other educational facilities. The Danish cultural and financial centres are Copenhagen, the capital of Denmark, and a virtual city, which has formed in Jutland, stretching from Århus in north to Kolding in south. The rest of Denmark has been termed ‘the edge’ (udkantsdanmark) or in ironic reference to the European blue banana, ‘the rotten banana’ (den rådne banan). In severe cases, villages in the outskirts of Denmark have been used for ‘social dumping‘ with empty houses being bought by speculators and rented to welfare recipients who cannot afford to live in big cities.

Søren Hermansen, managing director of the Energy Academy on Samsø, a Danish island which has become self-sufficient in renewable energy, and currently aiming to become Denmark’s first ‘fossil fuel free’ community, emphasizes consumers’ demands to know the origins of food.

Increased awareness of resources – especially in connection to transportation of foods – will also impact the organisation of future food supply. Frank Erichsen, a farmer and artisan, known in most of Scandinavia for a TV series focusing on self-sufficiency and craftsmanship, thinks that in 2030 food will cease to be transported over long distances, making it easier for small-scale farmers to sell their products locally: “The small producers will create networks, working specifically with selling locally produced foods”, he predicts. “You might even have separate shelves in supermarkets, dedicated to locally-produced foods”.

The new alliances between urban and rural environments must encompass more than just food production, Søren Hermansen suggests. He predicts that scarcity of resources will necessitate a redistribution of resources from cities to rural districts. The left-overs from consumption in the cities must be recirculated as compost, containing valuable nutrients for farm land. “You might even imagine that plans for new residential areas in cities must include an alliance with a specific rural area”, he says.

The group’s report offers no practical instructions or public funds. All initiative must come from famers themselves – and there must be an economic benefit for farmers. An example already exists at Knuthenlund, an estate on Lolland, which in 2007 converted to organic production. The owner, Susanne Hovmand, also a member of the vision group, has made the conversion pay off economically and socially: The number of employees has grown from four in 2007 to more than twenty today. Knuthenlund’s dairy and meat products have become a commercial success.

Knuthenlund works with original Danish livestock breeds and has been experimenting with old pest control techniques. Susanne Hovmand says that the integration of ancient knowledge in modern technology makes it possible to get the same yield from organic fields as from conventional fields.

Agriculture is everybody’s business. The way land is used and distributed is key to improving the quality of local food production, not to mention ecological forms of farming and livelier rural areas. […]

Who is the new Romanian Food Market Law really helping?

Hidden costs and extra bureaucracies in a new law have made it more difficult for farmers to sell their own produce, as Eco Ruralis explain. […]