Two months ago, from 26 to 28 October, the 8th Forum of Plataforma Rural took place in Gernika, in Basque Country, Spain. It is a meeting that happens every two years, bringing together members of the Plataforma Rural network – one of the most representative social movements in Spain. Its members include environmental, farming and social progressive groups from rural areas. From its inception, the platform has focused exclusively in rural and agricultural issues. CAP is one of the first issues they started working on by trying to communicate that the problems of agriculture affect us all. 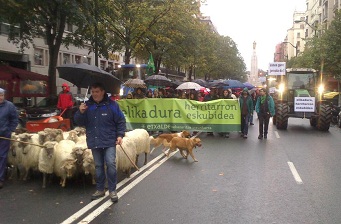 As Daniel López Garcia from Ecologistas en Acción reports in the Magazine Fertilidad de la Tierra No 51, this year’s forum was special in many ways. “Due to its high attendance (over 300 people), especially farmers and rural dwellers, whose presence had been declining in the last forums. Due to the high presence of women and youth that live in rural areas…Finally, the large number of ongoing projects on food sovereignty presented by the attendants.”

The main conclusion of the Forum, reflected in the Forum Manifesto, is that “the construction of food sovereignty and a living countryside depends entirely on our ability to incorporate youth into the fields.”

During the meeting on the 27 October, the movement Extalde in the Basque Country organised a very successful demonstration with the slogan “Food is our right, not a commodity.” Nearly a thousand people showed support for peasant family farming, and its role in quality food production, job creation and keeping rural areas alive. Along with the peasants (baserritarras) and fishermen, many people from social organisations, unions and NGOs joined the demonstration. This is actually the first time that peasants have mobilised and united along with a great number of people outside the primary sector. This is the result of the work of unions such as the EHNE – Bizkaia that for many years have worked to create social alliances and bring awareness to all citizens that food concerns everybody.

The Etxalde movement has demanded a change in the production model and the way the global food chain is organised. It is necessary that people, the peasants, the fishermen and the consumers decide over their food. Agricultural policies should be drafted on the basis of citizenship. Food is a right, not a commodity.

Government position on CAP not popular with NGOs

Huge State Land Sell off in Hungary – who benefits?

A huge sell of of state land is about to happen in Hungary. Beginning 16th November, the Hungarian State will start selling a whopping 380,000 hectares of its land – by the end of the year. In just 44 days, this huge amount of land will be sold off into private ownership. But who is going to get this land? […]

Many events have moved online, which has advantage and disadvantages. It can be easier to attend, but then, in rural areas, broadband coverage can be poor. In a way, this conundrum acts as a soft landing into a whole series of interesting consultations, readings, presentations and events, from Ecolise, ENRD, DESIRA and others.  […]