Tomorrow, September 5th, cyclists taking part in the southern bike tour for the Good Food March will arrive in Strasbourg marking a significant point in their journey to Brussels to demand a fairer and greener reform of the EU’s Common Agricultural Policy. 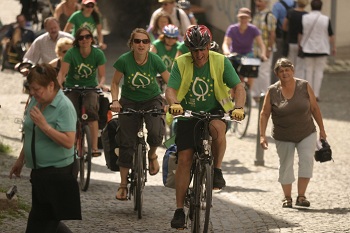 Wearing their trademark green Good Food March T-shirts, the cyclists – some of whom have been on the road for almost three weeks now – will gather at the Europe Bridge at 11am, before making their way to Place Kléber (via the Parliament) for a public picnic from 14.00. A press conference will be held at 17.00, followed by a round table on “CAP and food sovereignty” at salle de L’Aubette. You can find the full programme (in French) for the day here.

After the day in Strasbourg, the group will set off on the final stretch to Brussels. The group is expected to grow in number as they get closer to the end of the march, with more and more people packing a tent, sleeping bag and bike pump, and taking their demands for food and farming policy in Europe directly to the decision makers in charge of the reform – anyone is invited to join the tour! Find contact details below. 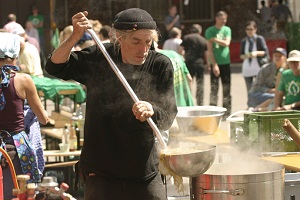 The southern bike route, which started out in Austria back in August, before joining up with the German route, is one of several bike tours currently heading towards Brussels. In two weeks time, routes from France, Belgium and the Netherlands will meet in the Parc du Cinquantenaire (Jubel Park), right in the centre of the city. Here, on the night before the final day of the Good Food March, cyclists will gather to share stories from their journeys and make final plans for the following day. Chef – Wam Kat, who has accompanied the group since Munich, will also cook his final meal for all the participants!

September 19th will mark the final, and perhaps most significant, day of the Good Food March. 100s of people are expected to join the cyclists to celebrate the initiative that has enabled farmers, citizens and young people to express their expectations for the CAP reform process. A day of activities including a brunch at Esplanade ‘Solidarnosc 1980’ (in front of the EU Parliament) will take place, followed by a civil society conference inside the Parliament. Find out more on the Good Food March website: http://www.goodfoodmarch.eu/19-september.html

WANT TO JOIN THE ROUTE FROM STRASBOURG TO BRUSSELS? GET IN TOUCH

Farmers, consumers and young people put their questions and views to MEPs at ARC2020 and Slow Food Conference […]

Count down to the Good Food March begins […]