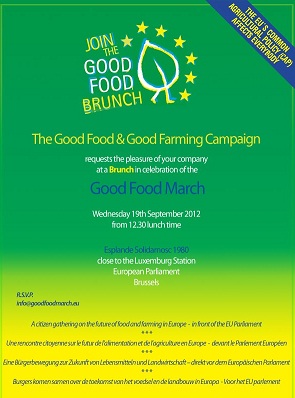 With just two weeks to go until our Good Food Marchers descend on Brussels, preparations are now well underway for September 19th – the final day of the Good Food March. The official invites for the colourful and dynamic civil society event were sent out yesterday (see opposite). The day will be a celebration of the diversity of food that Europe’s farms and rural areas produce, as well as a welcome to those who have travelled by bike from different cities across Europe to demand a fair and more sustainable Common Agricultural Policy.

The day will start off with a procession through Brussels (accompanied by a fanfare) to deliver the photo albums containing all the testimonials of EU cititzens that have been collected in the form of photos over the past few weeks*. After the procession, 100s of people are expected to gather in front of the EU Parliament to meet with MEPs and celebrate the initiative that has enabled farmers, citizens and young people to express their expectations for the CAP reform process. A brunch will be held at Esplanade ‘Solidarnosc 1980’ (in front of the EU Parliament), followed by a civil society conference, organised by ARC2020 and Slow Food, inside the Parliament. Speakers at the conference: CAP REFORM 2020 – an opportunity for European democracy will include participants from the Good Food March, as well as Carlo Petrini and Dacian Ciolos. The event is being held under the patronage of Martin Schulz – president of the Parliament.

Interestingly, as these people gather in Brussels, united by their common demands for the future CAP, just across the channel in central London, a group of people with a different outlook on the future of food and farming will be meeting on September 19th for the start of a two day event called Sustainability in the Food Chain. Although a promising name, the list of confirmed attendees for the conference suggests otherwise. Guests include the companies Unilever, Sainsbury’s, McDonald’s Restaurants and DuPont. You can find a full list of speakers here. A pre-Conference Seminar – Reducing Food Waste, from Farm to Fork – is also scheduled for September 18th, and is expected to include speakers from Cargill, General Mills and Bayer. It will be interesting to compare the outcome of the two conferences, although maybe the topic is where similarities will end. We can only hope that the CAP reform really is a chance for democracy.

*There is still time to send a photo to the Good Food March campaign. Send them to photo@goodfoodmarch.eu today!