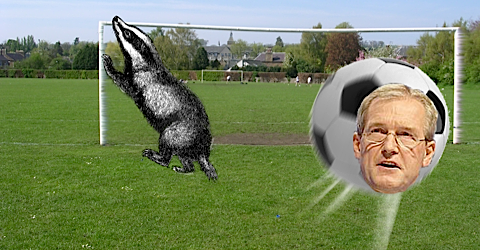 Following a less than successful pilot cull of badgers in Somerset, UK farm minister Owen Paterson last Wednesday told the BBC that the “…badgers moved the goalposts.” The minister told Parliament that private contractors had culled 850 animals, while official scientific estimates of the badger population in Somerset ranged from 2,400 last year to 1,450 this year, before culling started.

If DEFRA can show that the test culls have been successful in reducing cases of bovine tuberculosis, the scheme would be rolled out nationally, wiping out more than two thirds of the UK badger population. Just over one month ago, Paterson reported to Parliament that the six-week cull was going according to plan, which envisaged a 70% cull rate.

Private contractors are believed to be applying for an extension of the cull, but the minister was already satisfied that the operation had been successful. Challenged by the BBC over the reliability of scientific badger population estimates the minister prevaricated.

“The badgers moved the goalposts. We’re dealing with a wild animal, subject to the vagaries of the weather and disease and breeding patterns,” he told the interviewer. Despite further questions, the minister repeated his faith in badger population estimates that varied by 40% over the space of a year and ignored suggestions during the interview that he had downgraded the original cull objectives to match the number of animals shot.

Badgers are the most readily identifiable wild vector for bovine TB in the UK, which can also be carried by deer. The Republic of Ireland has controlled badger numbers with wire snares and shooting, but the UK is testing the effectiveness of shooting the animals on the surface.

In New Zealand, where there are bovine TB hotspots, dairy farmers cull brushtail possums to slow down the spread of the disease. Once infected however, the possums’ normal behaviour patterns break down: sick animals are more likely to wander into paddocks and come into contact with cattle or (farmed) deer.

Likewise in the UK, the fragmentation of social groups of badgers in the pilot cull zones brings a risk of mixing healthy and infected animals across a wider area than before. Despite his reliance on science, the minister may find that badgers move more than just goalposts.

The longer we delay mitigation measures, the higher the costs and risks for the functions and services our land ecosystems provide, warns the IPCC Special Report on Climate Change and Land Use. If we want to keep warming below 1.5°C, land use must be part of the equation. Louise Kelleher unpacks the findings. […]