A silver lining in the Brexit cloud is that people can radically rethink how food, farming and the rural space operate in the UK. What will this mean for direct payments, for environmental regulations, for food security  – and who will do the hard work of farming? Finally, is some of this blue sky thinking of interest to the rest of Europe? Peter Crosskey presents two scenarios this week from the UK for life #afterCAP. First, its the People’s Food Policy. 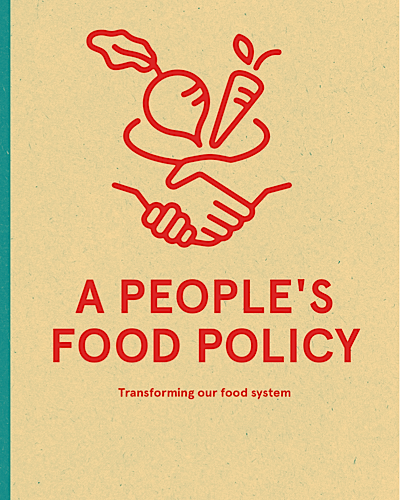 Alongside the start of Brexit negotiations last month came the launch of A People’s Food Policy – a ground-breaking manifesto outlining a people’s vision of food and farming in England. It is supported by over 80 food and farming organisations. The full document is available for download here.

Scotland is already developing national food policies in the form of a ‘Good Food Nation Bill’. However, after decades of political indifference, England has yet to address a whole raft of food issues, many of which arise from unquestioning deference to the commercial interests of the country’s major food retailers.

Leaving the single market or the European Customs Union will mostly likely push up imported food prices. Meanwhile, a small band of Tory hardliners in Westminster is preparing to choke off a primary source of labour in UK food production, from farms to factories. The UK government could hardly wreak more havoc if it tried.

The authors of the report argue that policy, legislative framework and a food act is needed that “…integrates the compartmentalised policy realms of food production, health, labour rights, land use and planning, trade, the environment, democratic participation and community wellbeing.” The document draws on 18 months of extensive, nation-wide consultations with grassroots organisations, NGOs, trade unions, community projects, small businesses and individuals.

“From the increasing corporate control of agriculture in the UK, to the price of basic food stuffs outstripping the rises in real wages, through to small farmers being aggressively squeezed out of the market, the UK has already lost more than 33 000 small to medium farms over the past decade,” warns food campaigner Heidi Chow. “The UK is witnessing a series of crises in how we produce, distribute and sell food. The government’s approach to addressing these problems is at best piecemeal and at worst non-existent.”

Chow added: “The new Environment Secretary Michael Gove suggested last week that the UK can have both cheaper and higher quality food after Brexit. But the experience of many UK farmers and growers suggests that cheaper food prices must be paid for through lowering environmental and social standards across the farming sector. Instead, we need to see greater regulation of the food retail sector to ensure farmers everywhere are paid a fair price for their produce.’’

Who Picked UK Fruit and Veg Before Migrant Workers?

64% of farmers earn less than £10,000 a year, eight supermarkets control almost 95% of the food retail market, and farmers receive less than 10% of the value of their produce sold in supermarkets. Excerpt from The People’s Food Policy

Dee Butterly, the coordinator of A People’s Food Policy, explains that: “The lack of a coherent, joined-up food policy framework in England is becoming increasingly problematic. In this country we have shameful levels of food insecurity, with food bank usage rising year on year, and an estimated over eight million people now in a state of such financial precarity they can’t afford to eat.”

The UK is well on the way to becoming a food pariah of the industrialised world, Butterly argues: “Just last week, Unicef released a report ‘Building the Future’, with evidence that the UK has some of the highest levels of child hunger and deprivation among the world’s richest nations, with one in five children under 15 years old currently food insecure.”

This is no time for tinkering, either: “The way our food system functions and is governed needs to change radically. We need to develop a national food policy in the coming years that transforms our food systems and that puts equality, resilience and justice at the forefront.

“As Brexit negotiations begin, we urge politicians to seriously consider this blueprint for a progressive national food policy which supports a food system where everybody, regardless of income, status or background, has secure access to enough good food at all times, without compromising on the wellbeing of people, the health of the environment, and the ability of future generations to provide for themselves.”

The proposals are based on a shared vision:

“Our vision is of a food system where everybody, regardless of income, status or background, has secure access to enough good food at all times, without compromising on the wellbeing of people, the health of the environment and ability of future generations to provide for themselves. In this vision, food is nutritious, healthy, good quality, local, culturally appropriate, fresh and sustainably produced.”

It is a discussion document that commends itself to progressive people. It is written for people who have had to wait far too long for a place at the table, to be heard and to be valued. Above all, it is a document that deserves to be acted upon before Brexit becomes a panic-stricken rout.

For Xavier Hamon, the term ‘chef’ is problematic. It fosters an unfair power dynamic between the person who produces the food and the person who cooks the food. Yet farmers and cooks are often up against the same challenges. Xavier is a founding member of the Slow Food Cooks Alliance, a partner of Nos Campagnes en Résilience. He favours a cooperative rather than a competitive approach to food – to the benefit of all involved. In conversation with Valérie Geslin. […]