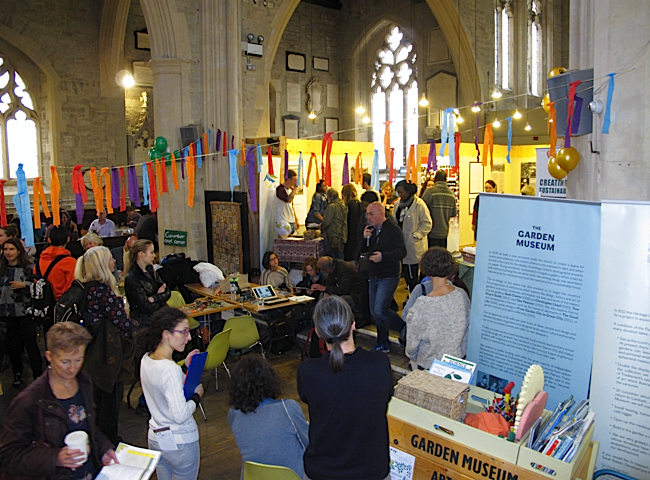 Over the weekend of October 11-12, London’s Garden Museum was a hub for the Great Seed Festival, a month-long celebration of the UK’s food sovereignty month. The Great Seed Festival is a wake-up call to warn the gardening public that most of the food we buy is grown from seeds that are controlled by a few transnational corporations.

Over the past century alone, three quarters of genetic diversity in plants has disappeared from the world. The seeds that have so far escaped corporate domination are threatened by policies that discourage community-minded growers from sowing, growing or exchanging them. The resultant risks to industrial-scale crops around the world puts production at risk from pests and plant diseases. As one stallholder observed, the US wheat sector depends on just three strains of wheat. This is as much a hazard for anyone who expects to consume wheat as it is for the growers concerned. 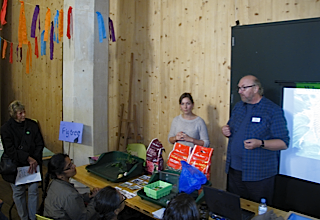 Corporate control of plant genetic material has piggybacked on the development of international trade routes for centuries, reaching a peak in the nineteenth century. The transition from moving seedstock to the bulk transport of monoculture crops coincided roughly with the age of steam. At this time, growing industrial cities exported their hunger to the four corners of the world, shipping in food grown on plantations occupying land that might otherwise have fed local populations.

The weekend’s visitors to the Slow Food London stand learnt that the carrots we now know as orange root vegetables arrived in Europe as purple roots. It was a Dutch plant breeder who crossed a mutated yellow carrot with the original purple stock that led to orange varieties. Slow Food London grows heritage fruit and vegetable varieties, keeping alive “forgotten foods” as part of its wider campaign for a better, safer food system.

Urban grower Paul Richens took visitors on a whistlestop tour of today’s staple vegetables and their origins from around the world. Onions from Egypt; maize and beans from Mexico; potatoes from the Americas; carrots from Afghanistan; the list is extensive and underlines the role of merchant fleets in bringing plant material to Europe down the centuries. 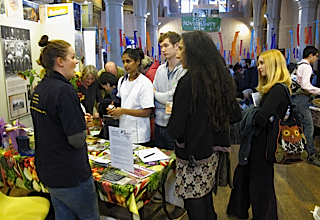 The extent of Londoners’ interest in producing their own food today can be gauged from Capital Growth’s rising membership, which is now more than 2,000. As an incentive to register, during the peak growing season Capital Growth runs a weekly prize for members registering their harvests. The project has an annual target for its registered members to grow about 80 tonnes of fresh produce, enough to generate one million meals. The value of the Londoners’ crops is estimated with an online application, dubbed the Harvestometer.

War On Want food sovereignty campaigner Haidee-Laure Giles was encouraged to find that most of her audience had heard of TTIP when she came to speak on the impact the so-called ‘trade deal’ would have on food production in general and local food in particular. Public awareness of the secretive corporate agenda intended to tear down any obstacles to private profiteering has risen in recent months.

Among the resources available to those asking questions afterwards were copies of the guide The Transatlantic Trade And Investment Partnership written by War On Want director John Hilary and published by the Brussels office of the Rosa Luxemburg Stiftung. Since its appearance in the spring, the booklet has done much to inform public awareness across Europe.

All arc2020 features on seeds