A silver lining in the Brexit cloud is that people can radically rethink how food, farming and the rural space operate in the UK. What will this mean for direct payments, for environmental regulations, for food security  – and who will do the hard work of farming? Finally, is some of this blue sky thinking of interest to the rest of Europe? Peter Crosskey presents two scenarios this week from the UK for life #afterCAP. This time, its Beyond 2020 – New Farm Policy.

An alliance of more than 90 UK NGOs is urging a root and branch reform of agricultural policy to take the place of the CAP in the post-Brexit years. The Sustain alliance has published a four-part policy briefing that echoes many of the objectives promoted by environmental campaigners across Europe. The document, Beyond 2020: New Farm Policy, is available for download – after registration – from the Sustain website. 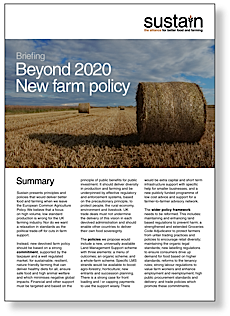 “The post-Brexit government will have a once in a lifetime opportunity to end some of the absurdities of Europe’s Common Agricultural Policy, which has not supported small and family farms well, and which contributed to a loss of farmland diversity and wildlife,” the project’s editor Vicki Hird told ARC2020. “Our proposals represent a practical way forward. They offer a basis for common ground between the industry and those groups championing the rural economy, conservation, public health and development.”

Sustain recommends that the retention of taxpayer support for farmers after Brexit. This would be managed with a new four-part deal for farming based on payments for public goods, capital grants, free advice and wider policy measures to ensure farmers can thrive. “Farming is a business but it is so much more,” explains Hird. “Our proposals recognise that farming provides wider public benefits including thriving rural communities, valued farm workers, good nutrition, a protected and nurtured environment and wildlife, and high animal welfare.”

Hird argues that the current government focus on high volume, low standard production poses real environmental risks, propped up by a de-regulatory agenda and new international trade deals. “It is wrong for the future well-being of the UK and its farming industry.”

Director of the Family Farmers Association, Pippa Woods, adds: “These excellent proposals contain most of the objectives family farmers have been working towards since 1979. If achieved we will have a happy countryside and plenty of wholesome home produced food.”

Specific measures include diverting payments from large landowners and biofuel production to supporting resilient farming, nature and animals, helping to alleviate flooding, creating more rural jobs and growing our own healthy 5-a-day fruit and vegetables, supported by a new Land Management Scheme. The document advocates support for new entrants into farming, smaller and diverse farms, agro-forestry and struggling sectors like fruit and vegetables. It also urges an overhaul of farmer training and advice.

The alliance is also calling for complementary government measures, such as extending the Grocery Code Adjudicator’s powers to ensure fair trading practices from supermarkets and their suppliers, keeping high standards, and requiring an increase in the purchase of local and sustainable food for public-sector organisations such as schools and hospitals.

Sustain is an alliance of around 100 national public interest organisations working for better food and farming. Sustain advocates food and agriculture policies and practices that enhance the health and welfare of people and animals, improve the working and living environment, enrich society and culture and promote equity. The proposals were developed in consultation with working party members drawn from the wider Sustain membership – including farmer and grower, conservation, environment, public health, organic, animal welfare and development organisations – and do not represent the views of any single Sustain member organisation. Groups that contributed include CIWF, CPRE, Family Farmers Association, Friends of the Earth, the Landworkers’ Alliance, National Trust, RSPB, Soil Association, UNITE.

Buzzing between industry and government