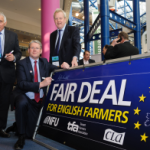 The National Farmers’ Union in England (NFU) this week criticised government ministers for “…their lack of engagement with farmers over plans for implementing the CAP.” The union accused secretary of state Owen Patterson and farming minister David Heath of refusing “…to listen to the concerns raised by farmers at shows around the country.”

NFU deputy president Meurig Raymond declared: “Our members feel that they have been let down over these negotiations through Defra ministers’ refusal to listen to them.”

He predicted that: “Defra minsters’ plans are likely to include the maximum 15% voluntary modulation. This on top of 10% EU-wide modulation, future financial discipline cuts, which in 2013 will be 5% and up to 2% removed from direct payments for a mandatory young farmers scheme, could see English direct payments cut by around 20% under the reformed CAP.”

NFU members may not all be strong supporters of the European Union, but they can find common cause and voice their disagreement if CAP funding is under threat.

Despite opposition from 18 EU Member States* a ban on pesticides from Ecological Focus Areas (EFAs) remains a distinct possibility for 2017. […]

A West to Wake – with a New Greenhouse Effect?

Here Frank Armstrong ponders how different the rural west of Ireland was – and can be again – through the medium of food production. Family excursions, a mid century self-help co-op movement, which used horticulture as a vehicle for change, and the future of food production all feature. […]