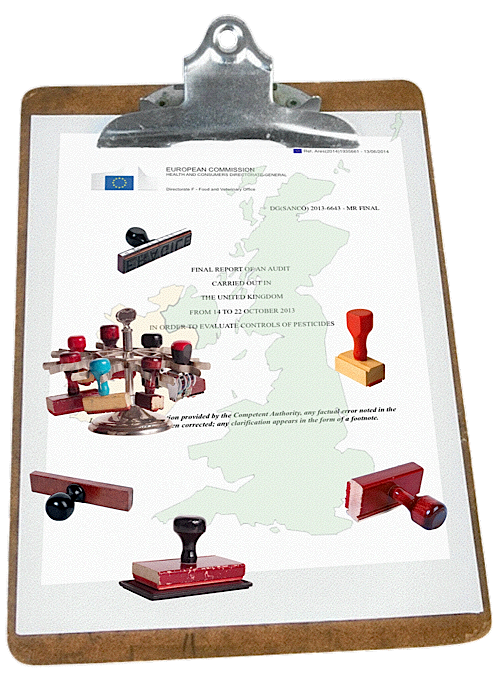 The onset of the holiday season in officialdom can be seen in a steady flow of end-of-term documents coming quietly home to roost in July-August. Last October, a team from the Food and Veterinary Office (VFO) inspected the UK pesticides competent authorities (CAs), making a number of recommendations (PDF). This document incorporated responses made by the UK that challenged the initial FVO position (PDF).

One of the more serious findings was the lack of a single unified system of reporting pesticide controls as part of an EU-wide regime, required under article 68 of regulation 1107/2009. This requirement came into force in June 2011, but as of October 2013 no UK data had been submitted.

A UK Health and Safety Executive (HSE) spokesman last week told ARC2020 that the final 2011 reporting, promised in January for the end of March, was now in the final stages of preparation. HSE confirmed that the delay had been caused by a lengthy and complicated information gathering process, involving hundreds of local authority contacts across Great Britain (different arrangements apply in Northern Ireland).

During this time however, reporting for additional months has been carried out and communication lines have been established for future administrative housekeeping. Thus, the 2012 reporting is expected to be submitted alongside the long-awaited 2011 data.

The UK competent authority responses to the FVO recommendations speak volumes and establish whose interests come first in regulating pesticides. Since the chemical regulations directorate (CRD) of the HSE earns a substantial income from product approvals (here is the price list) the observation that as many as one in 10 approvals were running late represented a threat to a core business revenue stream. Time to hire more approvals staff, the CRD said in January, as DEFRA announced job cuts across the rest of its workforce. “Recruitment – the UK CA recruited to 18 new posts last year; and is currently recruiting to a further 25 posts to develop additional capacity which will be in place by the end of April 2014.”

While a business case can be made for taking on 40 staff to keep up with the chemical industry’s burgeoning compliance requirements, enforcement commits funds and resources that have to be found out of budgets. Pesticide use is inspected as part of the Rural Payment Agency’s cross-compliance checks, which are carried out on 1% of those registered for Single Farm Payments. Pesticide users that are not supported by the CAP, such as golf courses or similar amenities, are not routinely inspected on the assumption that they do not constitute the same level of risk as larger, agricultural users. However, a 1% rate of cross-compliance testing for agriculture is hardly a big box to tick.

When it comes to checking for residues, the primary focus for UK spot checks is retail premises, since the term “point of supply” is interpreted as the point of sale to the general public. To be fair, given the high proportion of imported fresh produce, many checks at packhouses are beyond the range and resources of UK inspection teams anyway. (Less than a quarter of the UK’s fruit and vegetables are home-grown. Source (PDF); Arc2020 detailed feature here)

The result is official complacency, which relies on pesticide-related problems being identified by members of the public and reported to CRD or HSE inspectors rather than actively searched out as part of a proactive enforcement regime. The idea that food production should be aiming for fewer plant protection products (PPPs), rather than rubber stamping ever more toxic products, has yet to, as it were, penetrate the dark recesses of technocrats’ thinking.

It may come as a mild disappointment, but no surprise then, to realise that retailer technical manuals are setting higher food safety targets and expecting more from suppliers than central government. Since the retailers apply contractual penalties on their suppliers for non-compliance, it is not hard to guess who is taken seriously. Or why.

Biodiversity is a buzz word in Hastings

The UK government has updated its CAP implementation timeline in preparation for a 2015 roll-out. […]