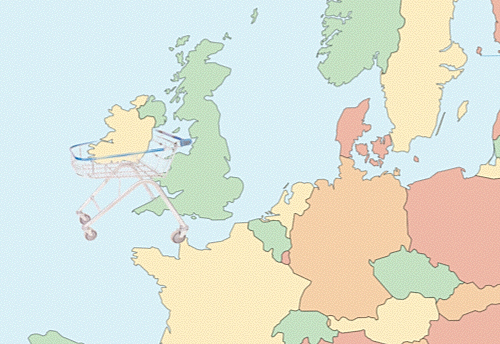 The UK carbon footprint for food is weighed down with imports. The country produced just over half its own food in 2012, according to the latest update to the Food Pocket Book 2013, issued by DEFRA in May. The 2013 trade gap for food came to GBP 21.3 billion, showing a long-term rise of GBP 3.7 billion since 2005, measured in 2013 prices.

More than a third of this trade gap is in fruit and vegetables. Three quarters of all fresh produce traded in the UK was imported, with the largest sectorial trade deficit of GBP 8 billion. The next largest trade gap is in meat, running sectorial deficits of GBP 5.9. Domestic meat production accounted for 83% of 2012 UK consumption. Eggs and dairy products came close to self-sufficiency, with 82% UK-produced.

The only UK sector to generate a trade surplus was beverages, which DEFRA attributes to exports of luxury-priced Scotch whisky. A similar effect can be observed in French food and drink exports, which are boosted in the same way by high ticket sales of long-matured Cognac to strong Asian markets.

As a consequence of being import-dependent, the UK food industry relies heavily on its supply chain, many players having made extensive cuts to warehouse stock levels over the past five years, by up to half and more in places. Suppliers generally hold more inventory than retailers, whose use of “just-in-time” systems is leading them to operate whole categories without back-up stocks of any description. While inventory cuts have generated fixed cost reductions, the long term risk is that any severe shortages in future will rapidly consign the illusion of cheaply-priced food to history.

As to where all this cheaply-priced retail food comes from, page 26 carries a pie chart in which the EU supplies 28% of UK food imports, topped up by 4% each from Africa, Asia, North America and South America, 2% from European third countries and 1% from Australasia. British Eurosceptics have yet to acknowledge the full extent to which the Netherlands, France and Spain keep the UK supplied with fresh produce, meat and dairy products: third country food pricing has not been mentioned or discussed in mainstream Brexit scenarios.

The simple fact is that Tim Lang has it right when he says, at regular intervals, the current UK government’s food policy is: “…leave it to Tesco.” This time last year he developed the argument at a local food conference in Coventry and reminded his audience of what features a sustainable food policy should have. His original vision for a sustainable food policy was set out in Looking Back, Looking Forward, a checklist for food policymakers of the future.

In the final of his four part series, Stuart Meikle considers what Ireland could produce for local on-island consumption. Infrastructure, climate, consumer sentiment all play a part.  […]

On the first day on June, Guy Singh-Watson handed over almost ¾ of the business- known primarily for its organic veg box deliveries in the UK – to its employees. So why did this especially committed individual do this – and reject tens of millions of pounds in the process? And what does this mean for food system democracy? […]