The UK government’s rural broadband investment programme has been slammed by the Public Accounts Committee (PAC) for subsidising an effective monopoly held by a privately-owned utility to the tune of GBP 1.2 billion.

Upgrading internet connections for rural areas is a crucial part of DEFRA’s plan to impose online accounts to manage CAP funding applications. Over the summer, local authorities placed 26 upgrade contracts with network utility BT, with a further 18 contracts widely expected to be awarded to BT as well. 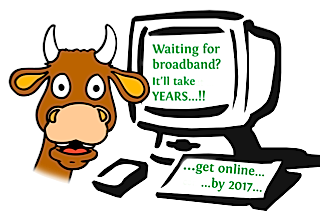 The framework for the broadband upgrade programme was set up by the Department for Culture, Media and Sport. However, the work will not be completed before 2017, two years behind schedule and in a way that gives BT a free hand to run the market.

The former publicly-owned utility was sold off in 1984 and ten years later had an advertising budget of GBP 160 million for campaigns that included the slogan “It’s good to talk.” However, today BT is gagging the local authorities, which are paying for network upgrades but are not allowed to divulge any future gaps in the network coverage to local taxpayers.

PAC chair Margaret Hodge MP declared: “Overall, BT is supposed to provide at least 90% coverage in rural areas but it is preventing local authorities from publishing proper information on the areas the company will and will not cover. Details of speed and coverage in each local project are also being kept confidential, preventing other suppliers from developing schemes aimed at reaching the remaining 10% of premises and stopping communities and others from identifying alternative ways of providing superfast broadband.”

Hodge criticised the culture department for failing to: “…deliver any meaningful competition,” and failing to secure access to: “…the single supplier’s cost information to check that BT’s bids are reasonably priced.” As a result, she concluded: “The lack of transparency over BT’s costs is a serious risk to value for money. Local authorities are prevented under the contract from sharing cost information which weakens their negotiating position with BT.”

The programme is being funded with central government grants, topped up by local authorities and the successful private contractor. Since central government only authorised bids from two contractors, BT is guaranteed to collect the remaining contract work after Fujitsu declared in March that it would not bid on any more contracts.

More support for the CLLD declaration

Organic farming in Bulgaria is a new phenomenon within the national policy and agri-food industry. […]