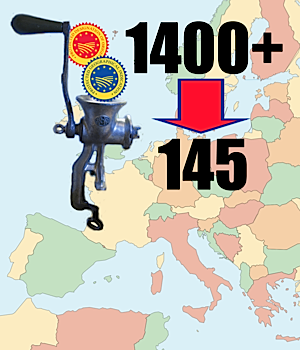 European negotiators have struck a clumsy compromise to protect about one in 10 of the EU’s Geographical Indicators (GIs) during transatlantic trade talks with the Canadians. Protected geographical terms have long been a bone of contention on the other side of the Atlantic, as ARC2020 reported earlier in its TTIP coverage.

Classified by some as a technical barrier to trade, the EU’s extensive register of geographical indications (GIs) has often been held up as an example of unfair practice by traders up and down north America.

On February 29, the European Commission released a summary of the final text of the Comprehensive European Trade Agreement with Canada (CETA), which is widely regarded as a TTIP testbed.

Had the details been in the public domain earlier in the negotiating process they would have sparked howls of protest: the current document, however, represents a fait accompli with a sting in the tail.

There are over 1,400 EU geographical indications, many of them wines and spirits that were bundled into the existing EU-Canada Wines and Spirits Agreement, which has now been incorporated into CETA. However, there remain hundreds of food GIs: some of them the cornerstones of long-established export businesses.

The Commission explains that: “Canada has accepted that all types of food products proposed by the EU will be protected at a comparable level to that offered by EU law, and that additional GIs can be added in the future.” That is the good news: however the Commission only put up a list of 145 GI foods for full protection in the first instance, of which 21 are either in conflict with existing Canadian trademarks or have issues for the Canadian market.

International lawyer  and geographic indicator specialist Bernard O’Connor takes up this anomaly in a discussion document on the CETA agreement, arguing that standing up for some but not all GIs is a flawed strategy. “The very simple question is why has the EU accepted that protection in Canada be limited to a subset of all EU GIs and that the level of protection be different even among this subset. An explanation that some names are considered generic in Canada while they are considered specific in the EU does not meet the facts,” O’Connor explains.

He goes on to confirm that GIs can be considered as intellectual property and were recognised under the Paris Convention of 1893, the first international agreement  on the subject. O’Connor is critical of the EU for “undermining” this longstanding principle. In particular, he criticises the way that more than 1,200 GIs currently registered but not listed for CETA full protection are explicitly excluded from being added to the list or upgraded. He also notes that the EU negotiators retreated from insisting on equal status for GIs and trademarks, which could undermine future prospects for GIs in legal disputes involving trademarks. In fact, O’Connor warns, the oversight goes against the spirit of the 2012 Treaty of European Union, if not the letter.

Read full list of CETA excluded GI’s . From page 515 all products are listed. Some countries e.g. Ireland have chosen to make exempt no products whatsoever.

On the 17th April 450 farmers demonstrated in the global day of action across Germany against TTIP (The EU-US free trade agreement) and genetically engineered crops.   They marched together under the slogan of ‘TTIP and Gentechnik, bleibt uns vom Hof [TTIP and genetic engineering stay away from our farmers]’. The demonstation, organised by the AbL (Arbeitsgemeinschaft bäuerliche Landwirtschaft), sought to emphasise how the TTIP would threaten the livelihoods of farmers and would pave the way for the introduction of American produced GMOs. Find more information at: www.abl-ev.de