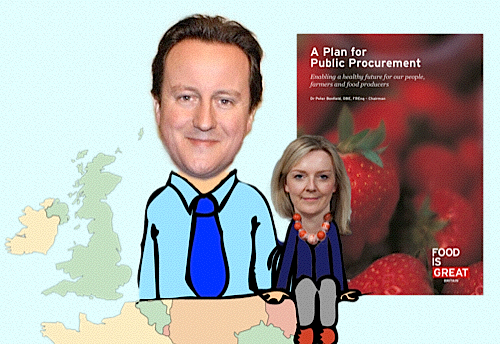 UK prime minister David Cameron needs to come clean about his real position on local food procurement in the UK. In his foreword to Dr Peter Bonfield’s report A Plan for Public Procurement, the prime minister is keen to be seen as an ardent advocate of local food. Cameron wrote: “England’s public sector spends £1.2 billion every year on food and drink. I want to ensure that money is spent on nutritious and sustainable food, delivered by Britain’s thriving rural economy.”

And yet, the TTIP international trade agenda is to kick down local food procurement schemes. In June, ARC2020 reported the Center For Food Safety publication Trade Matters. The current public procurement negotiation position threatens to kick local agreements into touch in favour of corporate interests and mass-produced food products. Maybe Cameron is out of touch with the working texts of his TTIP negotiating team? Maybe he wants to have his local cake and eat it.

More to the point, of the two government ministers announcing this policy initiative, Cameron has had more regular access to the international trade agenda than his recently-appointed environment minister. Liz Truss deserves credit for meaning it when she writes, in relation to Public Procurement: “There is a huge potential economic benefit to farmers and food producers. Food and farming is already Britain’s largest manufacturing sector, with three million people working in it. This deal will mean a further £400 million of business available for this important industry.” She could be sure of massive public support if she were to challenge the TTIP public procurement position on this basis.

In a parliamentary written statement, she told MPs that: “By using a simplified and more consistent approach. Government procurement can open up the public sector market to small and local businesses, which means more competition and good value for the taxpayer. It will allow more locally-sourced food to be served in our public sector organisations, which means more money into the local economy. It is also good for the environment, as the approach supports UK farm production standards and measures to reduce food waste. It will encourage healthier eating, foster a great connection with food, and celebrate local food.”

However, less than a week into her new ministerial job, Truss has already been set up by her prime minister to promote something which will be undeliverable if the TTIP international trade agenda continues to be pursued slavishly and secretly. Through no fault of her own, the minister could be presiding over a monumental UK government own goal.

Foodie localism loves farming in theory, but not in practice

The explosion of farmers’ markets has been driven by consumer desire and convenience. The economic realities for farmers still sit uncomfortably alongside the practice of many farmers’ markets. […]

Welcome to Mother Earth – Móðir Jörð – an organic farm in Vallanes, East Iceland, where people have lived and farmed since the 12th century. Here, Eygló Björk Ólafsdóttir and Eymundur Magnússon grow grain and vegetables, and cultivate local food culture in their on-farm shop and café.

The couple are in many ways ahead of their time. In the seventies they helped bring back barley at 66°N. In the eighties they got started on planting one million trees on the farm. In the nineties, their farm was one of Iceland’s first to be certified organic. Now, with the season of the midnight sun almost upon us, Eygló shares her first letter from the farm.  […]